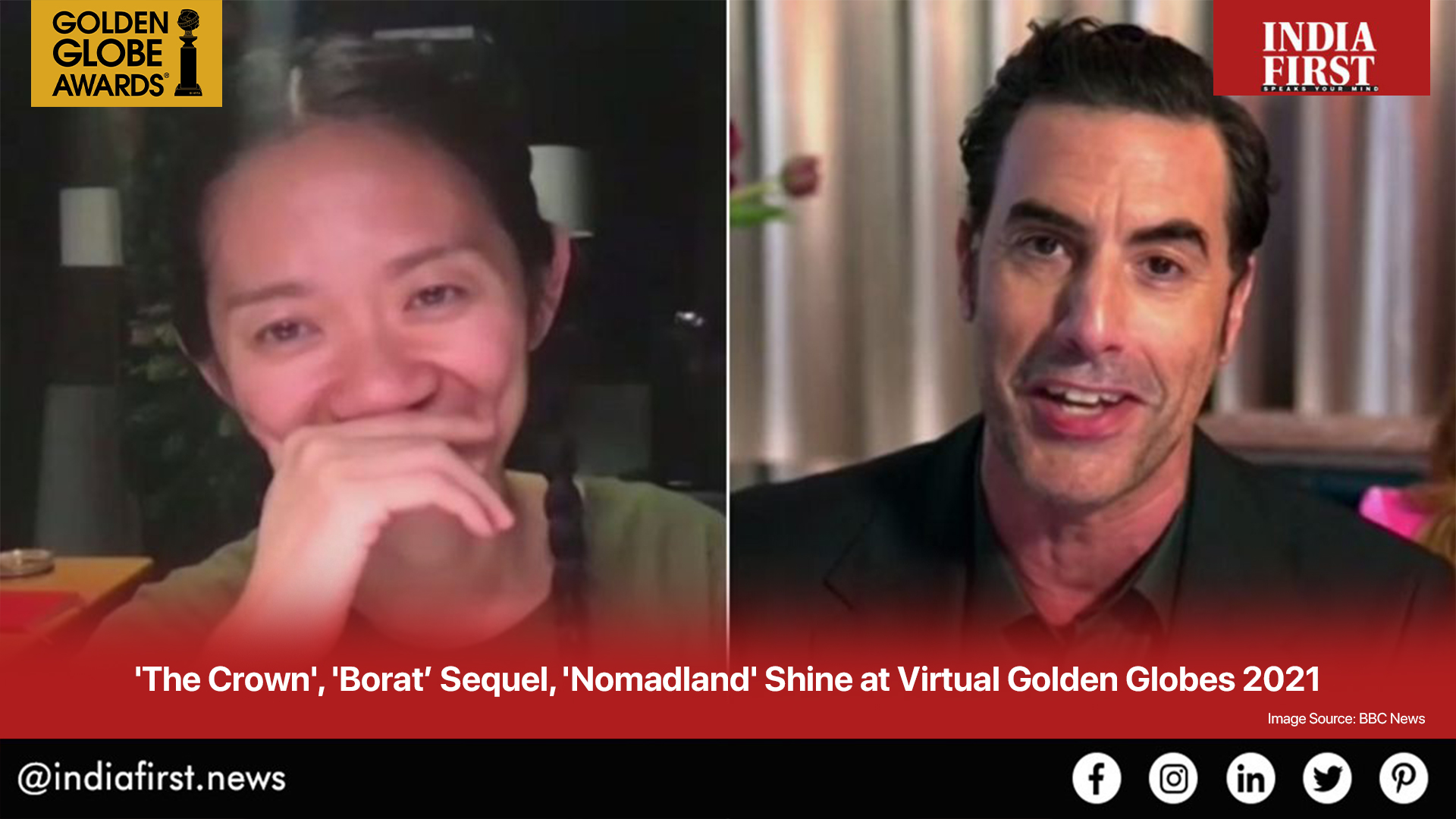 “Nomadland” and “Borat Subsequent Moviefilm” won the biggest honours at the 78th Golden Globe Awards, but “The Crown” and late star Chadwick Boseman were among the most celebrated winners, too, while veteran Jane Fonda was feted with the lifetime achievement award.

The ceremony was held virtually and the live audience consisted of frontline workers and first responders of the Covid-19 pandemic.

Actresses Tina Fey and Amy Poehler returned to hosting duties this year, but they were in New York and Los Angeles respectively, marking the first time the Golden Globes have been bicoastal.

The best drama film went to “Nomadland ” starring Frances McDormand as a homeless woman travelling through the American West.

The best director award went to Chloe Zhao, who became the second female winner of the category in Globes history, after Barbara Streisand in 1983, reports bbc.com

Zhao said: “Thank you everyone who made it possible to do what I love. I fell in love with making movies and telling stories because it gave us a chance to laugh and cry together, to learn from each other, and to have more compassion for each other.”

“Thank you to the all-white Hollywood Foreign Press,” said Sacha Baron Cohen as he accepted the prize, referring to the recent revelation that the organisation behind the Globes currently has no black members.

The actor joked about the awards body as he was named best actor in a comedy or musical for the same film.

“Wait, Donald Trump is contesting the result. He’s claiming that a lot of dead people voted, which is a very rude thing to say about the HFPA (Hollywood Foreign Press Association),” he quipped.

Other winners included Rosamund Pike, who was named best actress in a musical or comedy film for “I Care A Lot”. The best supporting actor went to Daniel Kaluuya for his performance in “Judas And the Black Messiah”.

The film cast Kaluuya essayed the role of US activist Fred Hampton, chairman of the Black Panther Party who was assassinated at the age of 21 in 1969.

The actor said that he hopes generations after this would see how Hampton fought.

“I hope generations after this can see how brilliantly he fought, he spoke, and he loved. He taught me about myself, made me grow as a man, and I appreciate that with all my heart,” Kaluuya said as he accepted his prize.

A “shocked” John Boyega was named best supporting actor in a limited series for his role in “Small Axe”.

“I’m so shocked. I’ve got trackie bottoms on and I’m comfortable but this is exciting,” Boyega quipped.

Josh O’Connor and Emma Corrin both won for their performances as Prince Charles and Princess Diana respectively.

Corrin said: “Most of all, thank you so much to (Princess) Diana, you have taught me compassion and empathy beyond any measure I could ever imagine.”

O’Connor added: “I’m very lucky to be able to work in this period, and there are so many people who are unable to work, who are alone and isolated, and I hope we can all collectively put mental health at the forefront our minds.”

Actress Gillian Anderson was named in the best supporting category in the series for her portrayal of former prime minister Margaret Thatcher.

His wife, Taylor Simone Ledward, accepted the award on his behalf. Boseman passed away last summer after quietly battling colon cancer for years.

Actress-singer Andra Day won in the best actress in a motion picture (drama) category for her performance in the OTT film “The United States vs. Billie Holiday”. Day is only the second Black woman to win at the Globes after Whoopi Goldberg, who won 35 years ago for ‘The Color Purple”, according to Variety.

Other winners included Mark Ruffalo for best actor in a limited series, and Pixar’s “Soul”, which won best animated film.

Aaron Sorkin paid tribute to the three women who were nominated for best director as he accepted best screenplay for “The Trial of the Chicago 7”.

“You are the reason my college-age daughter wants to be a filmmaker, and I’m never going to forgive you for that” he said.

The nominees and winners were voted for by the 87 members of the Hollywood Foreign Press Association (HFPA), a group of international journalists based in California.

According to an investigation, the HFPA had no black members, representatives from the organisation said during the ceremony, adding that they planned to address the issue.

Veteran actress and activist Jane Fonda was feted with the Cecil B DeMille Award for lifetime achievement and used her acceptance speech to call for greater diversity in the industry.

She talked about the importance of storytelling, saying powerful stories can “change our hearts and our minds”.

Fonda said: “Let’s all of us make an effort to expand that tent so that everyone rises and everyone’s story has a chance to be seen and heard. Let’s be leaders.”