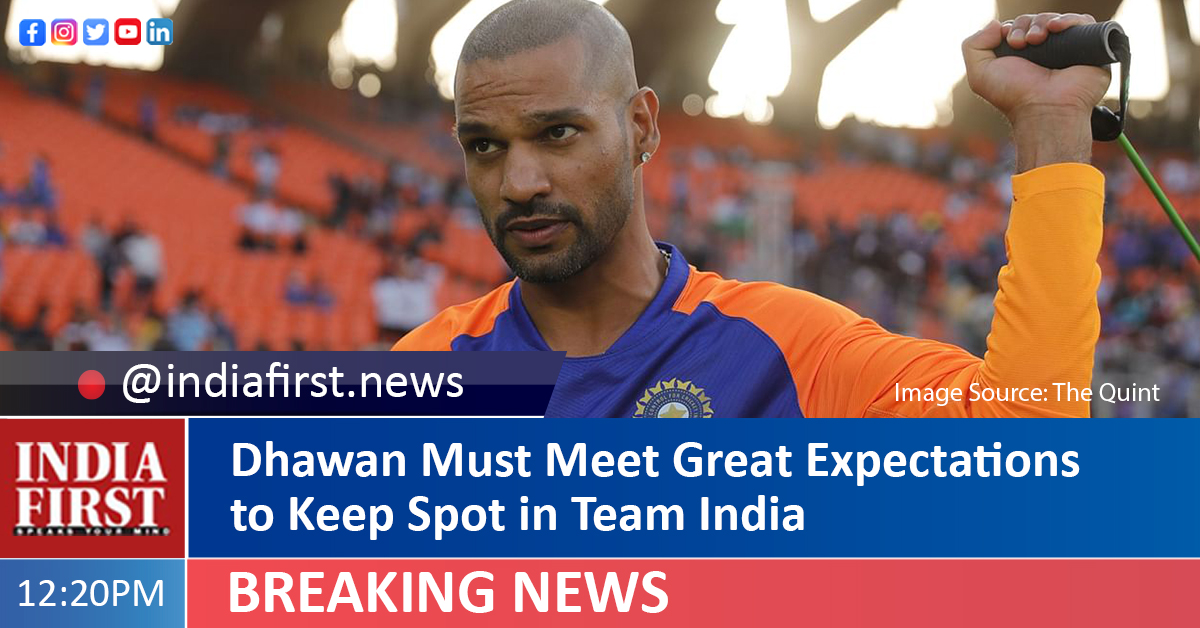 Ishan Kishan’s success as opener may put pressure on Shikhar Dhawan to retain his place in the India team ahead of the T20 World Cup that is scheduled to be held in October-November this year in India.

Dhawan, who has been a permanent fixture in India’s white-ball squads, has of late been dabbling between two roles – whether to anchor or play aggressively, both in the Indian team and at his IPL franchise, Delhi Capitals.

The left-handed opener was benched for the second T20 International after making a 12-ball four in the first game which India lost. He was replaced by Kishan, who smashed 56 off 32 balls. It is unlikely that Dhawan will return unless Rohit Sharma, who is due to return for the third game after resting for the first two matches, extends his break. Sharma will likely replace K.L. Rahul while Kishan will continue opening ahead of Dhawan in the third T20I.

Dhawan’s returns in recent matches for India haven’t been disappointing — he helped India chase a 195-run target during the first T20I in Australia with a 36-ball 52. But they haven’t been very good either – there have been multiple failures to convert starts. Such is India’s bench that a few failures, especially to get on top of the bowling, can push one to the fringes.

Prior to lockdown, Dhawan missed the T20I series in New Zealand where both Rohit Sharma and Rahul excelled to become primary contenders to open in T20Is.

His inconsistent run in the domestic matches he has played over the last few months has been even more disappointing.

Barring a 153 against Maharashtra, his stint in the recent Vijay Hazare one-dayers was largely unfruitful. His scores in the domestic one-day tournament were 0, 6, 0, 153 and 44. In the Syed Mushtaq Ali T20 tournament that preceded it, he got scores of 23, 5, 77 and 0.

Prior to the Australia tour, though, Dhawan had a productive Indian Premier League (IPL) season making 618 runs at an average of over 44 with two centuries and four fifties.

Former India cricketer M.S.K. Prasad, who was chairman of the previous selection committee, however, said that Dhawan cannot be written off in white-ball format.

“Unfortunately he is not getting the runs. But he will definitely be in contention for a spot in the T20 World Cup. He cannot be written off in white ball format. He has been a phenomenal and proven performer,” Prasad stated, adding that the healthy headache India are facing with youngsters coming in and performing doesn’t allow anyone even if it is the experienced Dhawan to let his guard down.

“At the same time the next brigade is coming, and the bench strength is great. This is a healthy headache. Till recently, Sanju Samson was there. But now he is not. So with so many players coming and performing, you need to keep performing irrespective of the fact that you are a senior or junior,” added Prasad.

“In such an atmosphere, the only way you can keep your place in the eleven is by performing.”

What goes against Dhawan is that he isn’t as flexible as the others and is thus more vulnerable to the axe. Most of the batsmen like Rahul or Virat Kohli or even Rohit Sharma can bat in the middle-order.

Unlike them, Dhawan has always been an opener in white-ball formats and additionally, according to sources close to him, ‘tasked with going after the bowling with Rohit playing the anchor’s role’.

“All these questions arise when someone is not performing or is not matching up to expectations. If he was doing well, this question (of him being one-dimensional) wouldn’t have arisen at all. There are many players in this team who play only as batsman – Shreyas Iyer, Virat Kohli or Rohit Sharma,” said Prasad.

The ex-chief selector, however, agreed that the others are more flexible.

“I agree, they are all a bit flexible as compared to Dhawan and can adapt to batting positions. KL, Virat have batted in the middle-order. I would still prefer KL in the middle,” he added.

But with time running out, Dhawan may have to prove himself all over again at this year’s IPL. Considering that this is India’s last big international T20I series, an IPL as productive as the one in 2020 can keep him in contention.

“Kishan has shown he belongs to this league. The way he played last year’s IPL and the knock yesterday. It is not easy to keep your place in the face of it. You have to keep performing. The countdown towards the T20 World Cup has begun and selectors will make up their mind,” said Prasad.