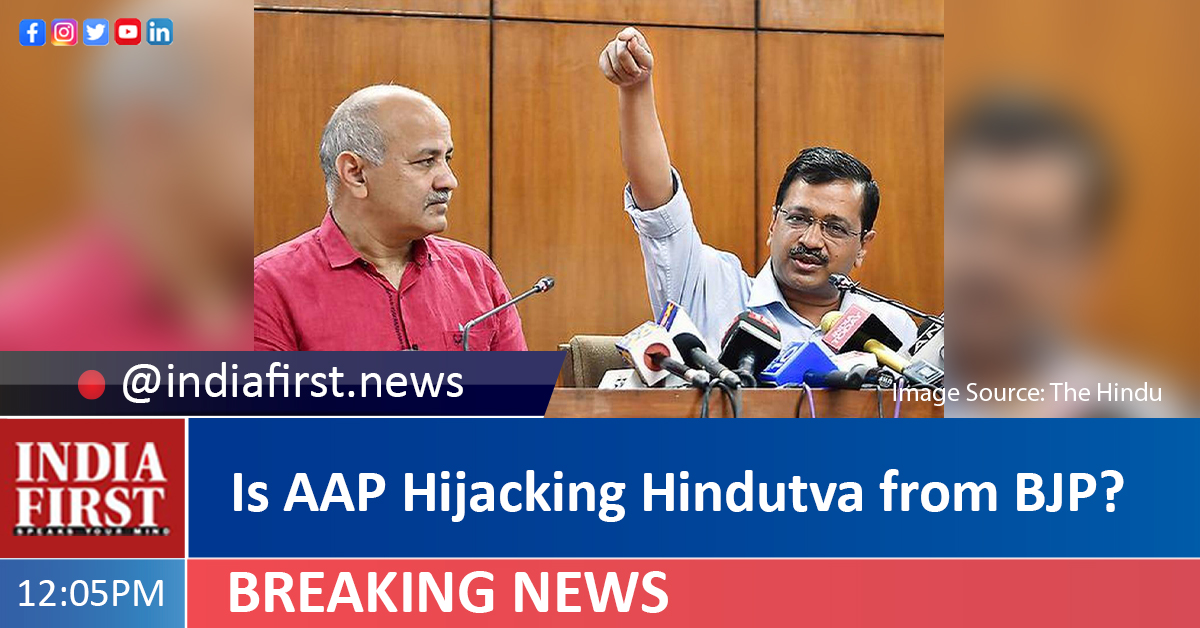 Legislators of Delhi’s ruling Aam Aadmi Party (AAP) chanted ‘Jai Shri Ram’ for the first time during the budget session which started on March 8 and ended March 12, but saw their BJP counterparts not joining them and even leaving the chamber amid the sloganeering.

The AAP, which seemed averse to get a Hindu tag so far, even presented a “deshbhakti” (patriotism) budget.

Presenting the budget for 2021-22 on March 9, Deputy Chief Minister Manish Sisodia, who holds the Finance portfolio, termed the annual budget a “deshbhakti” budget and said the Delhi government under Chief Minister Arvind Kejriwal’s leadership has adopted 10 principles of ‘Ram Rajya’ and made all efforts to justify its claims, citing its development works in the last six years.

The AAP, from the first day of the session, tried to create an atmosphere of patriotism in the Assembly right after the Lt Governor’s Address, and it remains to be seen how effective its use of “deshbhakti” and “Ram Rajya” against the BJP will be.

Kejriwal, in his recent visit to Surat where his party performed unexpectedly well in the civic polls, had stated that people have started taking the AAP as an alternate not only in Gujarat but in many other poll-bound states too, and his speech in the Delhi Assembly seems to indicate that the AAP is trying a master stroke to counter the BJP and Prime Minister Narendra Modi.

Party legislator and spokesman Saurav Bharadwaj said the party highlighted its achievements and related its development works with patriotism, thinking the opposition (BJP) would support it. However, he said that the BJP’s response had amazed them.

“Even we were surprised to see that BJP legislators did not pay heed to deshbhakti or Ram Rajya slogans. It seems that the BJP leadership has yet to decide whether to oppose AAP’s deshbhakti or oppose it.”

Asked whether the party will carry its ‘deshbhakti’ strategy in other states, Bharadwaj said: “It is not a political strategy of AAP. It came as a reply for the BJP as it has been questioning whether Kejriwal is Ram bhakt or not. Therefore, Kejriwal gave a reply to the BJP that he is a Lord Hanuman bhakt and his government follows principles of Ram Rajya.”

Though Kejriwal and Sisodia targeted the BJP in and out the Assembly, alleging it of not supporting their patriotism, the BJP is not impressed.

“We will welcome it if they adopt BJP’s path of Lord Ram, but their (AAP) strategies will be incomplete without including PM Modi and BJP’s achievements.”

Reacting to Kejriwal’s statement for taking the senior citizen to Ayodhya once the Ram temple is completed, Bidhuri said: “BJP won’t oppose this move because it is a win-win situation for us if they do so. Before it, the opposition slammed BJP for not building Ram temple in Ayodhya and now when it has been started, they do not have so much on this.

“Kejriwal should take senior citizens to Ayodhya, I personally will be too happy. But, before leaving for Ayodhya, he should thank Prime Minister Narendra Modi for making this dream true.”