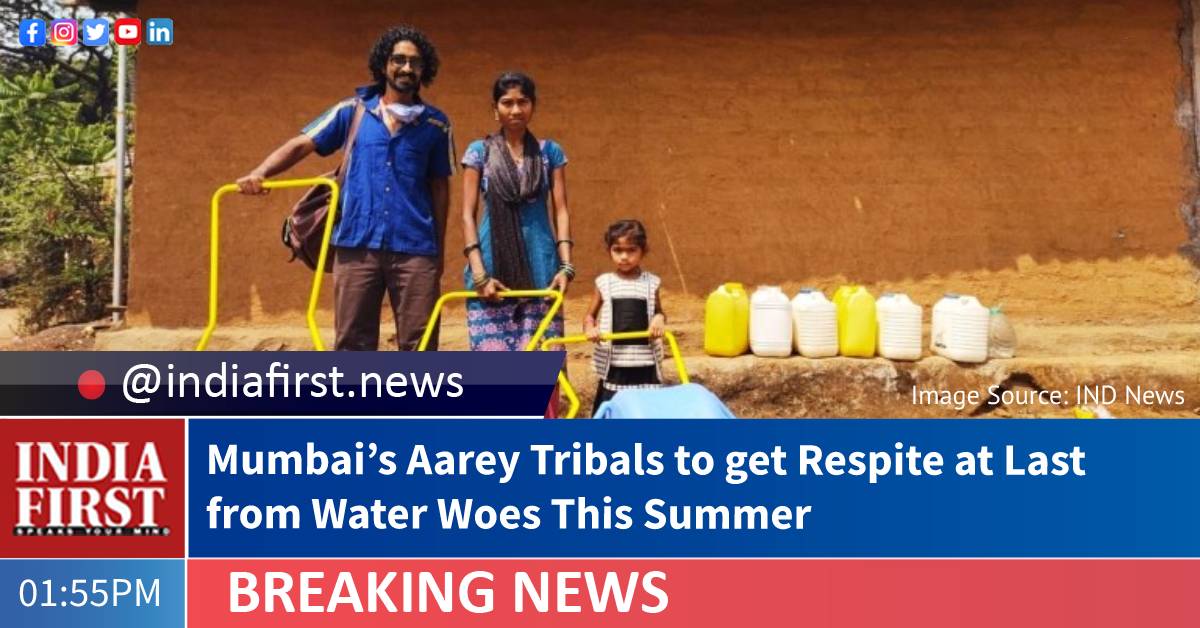 As the humid Mumbai summer climbs to its peak from April, the biggest anxiety for the 8,000-odd tribals surviving in 27 hamlets (padas) inside the Aarey forests is facing yet another water crisis during the scorching hot months.

Though flanked by the biggest freshwater body, Vihar Lake, these tribals – living here since centuries – are deprived of their share of drinking and agriculture water for their parched lands.

This summer, however, their thirst may be somewhat quenched, thanks to the initiatives by a local citizen group and welcome help from a corporate group.

Earlier this week, RewildingAarey group with generous help from Aries Agro Ltd., rolled out a pleasant present for the tribals – 15 large gleaming blue waterwheels – as a pilot project.

“We handed over the rollable waterwheels for the women farmers in Khambachapada, Gaodevipada and Maroshipada hamlets. Each has a capacity of 45 litres and can be rolled up or down any type of surface,” said a volunteer Sanjiv Valsan.

Until now, the womenfolk rushed to stand in long queues, then trudge long distances within the Aarey forests – spread over 15 sqkm – climbing and descending hills with headloads of metal or plastic pitchers with a capacity of 5-litres or so, and most of it spilt out on the rough return trek.

“The bigger issue is that the BrihanMumbai Municipal Corporation (BMC) releases piped water only for one hour, while the Aarey Colony doesn’t allow any water-harvesting or groundwater use. This is the status in the heart of the country’s commercial capital,” rued Valsan.

RewildingAarey coordinator Brian J. Phillips said that the Vihar Lake water is diverted for use by the city folk, and the tribals who carry out organic farming for a living are being willy-nilly nudged out of the forest to make way for lucrative projects.

Aries Agro Ltd. Chairman and Managing Director Rahul Mirchandani said this is the first time the company is experimenting with the water-wheels in an urban forest like Aarey in Mumbai.

“This is part of our CSR activities all over India where we have given away over 5,000 such waterwheels in remote or needy villages across two dozen states in the past 18 months or so…” Mirchandani said.

He said that after studying the feedback from the tribals, the company would consider rolling out more waterwheels for the Aarey hamlets to help resolve their daily water woes, which become critical in the summer.

Each waterwheel costs an average of Rs 2,000, is sturdy and long-lasting, avoids wastage, is easy on the users as it can be moved even with one hand, making it useful for women carrying infants also, explained a villager.

Valsan and Phillips say the waterwheels could be useful for the ‘RewildingAarey’ initiative with more tree plantations, especially in some of the balding patches.

On the recent initiative, they said only one village Nausachapada gets fully piped water, but in the remaining 26, women gingerly balance 3-4 pitchers (handa) on their heads for their daily quota, at times spending almost the entire day in the venture.

Other Aarey volunteer groups say in the long run, the plan is to solve the water problems of the entire region, digging wells, rainwater harvesting, supply from the Vihar Lake and other sources, planting more trees, ensure availability of water and delivering it from the sources to the consumption spots, etc.

The green Aarey has been a red-hot political issue in the past few years and shot into global headlines after a staggering 2,141 (out of 2,185) trees were hacked in 40 hours, or roughly 1 full-grown tree per minute, in October 2019, by the Mumbai Metro Rail Corporation Ltd (MMRCL) to clear the ground for a Metro Car-shed.

After a massive public outcry, the new Maha Vikas Aghadi government decided to shift the carshed to another location and added 800 acres more as ‘forests’ in Aarey, linking it to the adjoining 103-sqkm Sanjay Gandhi National Park.

The lush-green Aarey houses many big and small wild animals, birds, insects, including several which figure on global endangered lists, a variety of plants and other natural bounty – a real jungle within a concrete jungle.