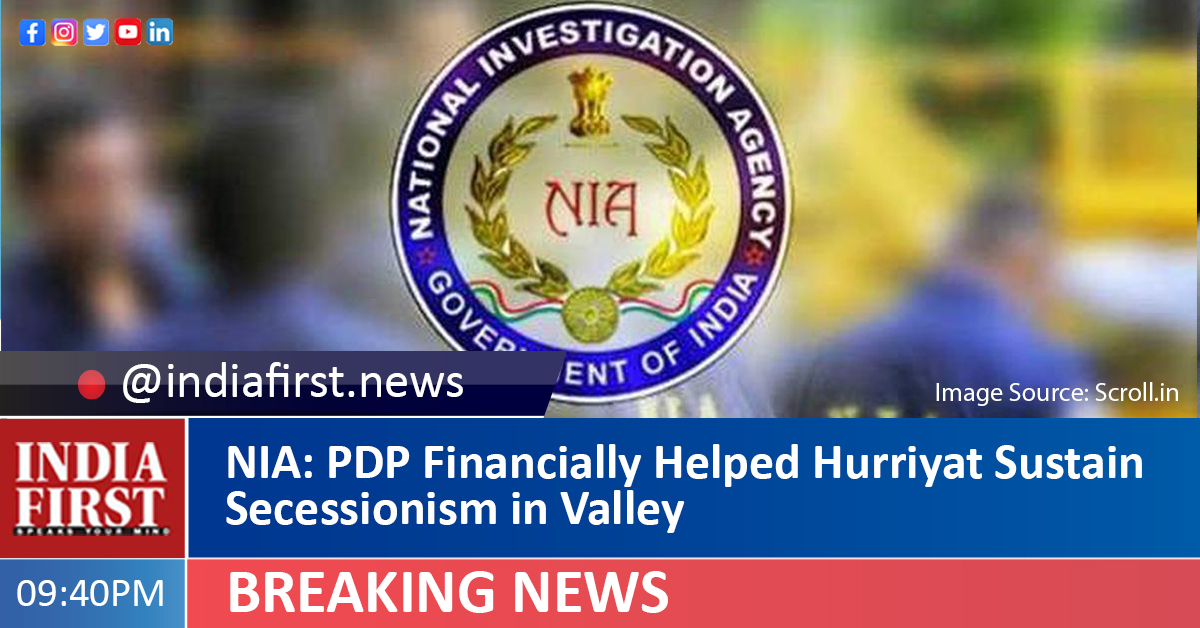 The People’s Democratic Party (PDP), which was in power in the erstwhile state of Jammu and Kashmir in alliance with the BJP, was pumping money into the Hurriyat Conference for keeping secessionist activities alive in the Valley, according to the National Investigation Agency (NIA) probe into the case related to suspended Deputy Superintendent of Police (DSP) Davinder Singh and Hizbul Mujahideen terrorist Naveed Babu.

The PDP had formed the government in J&K in alliance with the BJP on March 1, 2015 with Mufti Mohammad Sayeed as the Chief Minister. After he passed away on January 7, 2016, his daughter Mehbooba Mufti was sworn in as the Chief Minister on April 4, 2016. However, the BJP pulled out of the alliance on June 19, 2018.

On March 22, the NIA had filed a supplementary charge sheet against three persons, including arrested PDP youth wing chief Waheed-ur-Rehman Parra, who allegedly worked as a financier for Hizbul Mujahideen, and two gunrunners – Shaheen Ahmad Lone and Tafazul Hussain Parimoo.

The NIA in its charge sheet has claimed: “Parra gave Rs 5 crore to Altaf Ahmed Shah aka Altaf Fantoosh, separatist leader of All Party Hurriyat Conference (APHC) who was charge sheeted in NIA’s terror-funding case, to keep the situation boiling in the Kashmir Valley after the killing of Hizbul Mujahideen terrorist Burhan Wani.”

In the charge sheet, the NIA said, “The amount of Rs 5 crore was given by Parra on behalf of PDP to Hurriyat Conference for keeping the secessionist activities alive.”

The charge sheet also claimed that Altaf Ahmed Shah was a close associate of Parra and was in “continuous touch” with him during the turmoil in the Valley after Burhan Wani was neutralised by the security forces.

Parra was arrested by the NIA in October last year. He had recently won in the District Development Council polls in J&K.

The official said that Parra was part of the “conspiracy” to raise and transfer terror funds to Hizbul Mujahideen militants for the procurement of terrorist hardware and was also a crucial player in sustaining the political-separatist-terrorist nexus in J&K.

Parra was instrumental in the revival of the PDP in south Kashmir, especially in the militancy-affected Pulwama district.

The NIA charge sheet also alleged that Parra entered into a criminal conspiracy along with accused Irfan Shafi Mir, Davinder Singh and Syed Naveed Mushtaq for raising funds for Hizbul Mujahideen to procure arms and ammunition for the terrorists operating in the Kashmir Valley to sustain the ongoing terrorist activities in J&K.

It further alleged that the association of Parra with Mir, Singh and Mushtaq was a part of the larger conspiracy hatched by the Pakistan-based leadership of Hizbul Mujahideen to make inroads into the important institutions and entities for want of desired support to carry forward the agenda of secession of Jammu and Kashmir from the Union of India by way of violent means.

The NIA alleged that Parra not only associated himself with Hizbul Mujahideen and Lashkar-e-Toiba, but was also in constant touch with the secessionist leaders and extended financial support to them to keep the situation of the Union Territory volatile.

Suspended police officer Singh is currently lodged in Kathua jail in Jammu division. He was arrested by the police on January 11 last year from the Jammu-Srinagar National Highway while transporting two Hizbul terrorists – Naveed Babu and Rafi Ahmad Rather – and a law school dropout, Irfan Shafi Mir, to Jammu.

After the arrest of Singh, initial investigations were done by the J&K Police before the case was handed over to the NIA. The police had said that the two terrorists and the lawyer had planned to travel to Pakistan.

The NIA had earlier claimed that its probe has revealed that the accused were part of a deep-rooted conspiracy hatched by the Hizbul and Pakistan to commit violent acts and wage war against India.