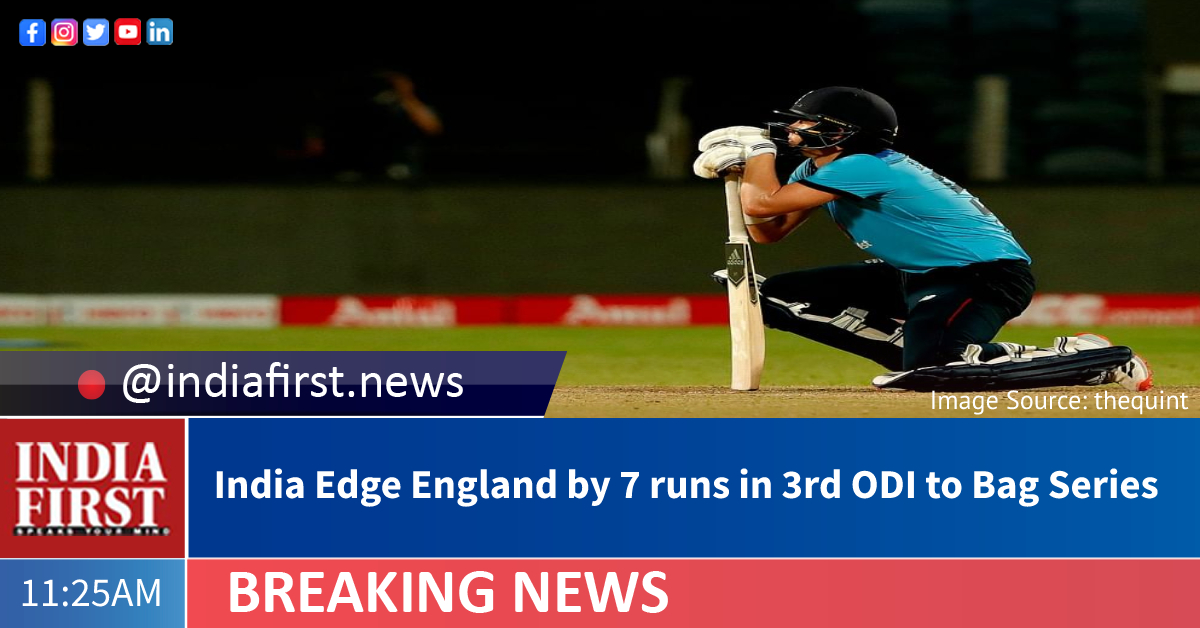 India survived a scare from England all-rounder Sam Curran (95 not out off 83 balls) as they managed to beat England by a slender 7-run margin in the third and final One-day International here at the Maharashtra Cricket Association Stadium yesterday night to clinch the 3-match ODI series 2-1.

Curran, who got a couple of lives, including one on 22, had walked in with England looking down the barrel at 168 for the loss of six wickets. They still needed 162 runs in 146 balls and when Moeen Ali was dismissed as the seventh man with the score on 200, it seemed all over.

But Curran stitched a 57-run partnership with Adil Rashid (19) for the eighth wicket and then added 60 runs with Mark Wood (14) for the ninth, to bring England within 13 runs of victory.

However, England could get just six runs in the last over bowled by T. Natarajan as Curran had, by then, lost all his partners and was the lone man standing looking for boundaries which the field placements by India (most fielders on the boundary line) did not allow.

Chasing 330 to win after India were bowled out for 329 in 48.2 overs in their innings, England got off to the worst possible start losing opener Jason Roy in the first over after the opener had threatened to tear Bhuvneshwar Kumar apart. Roy hit Bhuvneshwar for three fours in the first five balls before the right-arm pacer broke through the defences to rattle the stumps.

The other opener Jonny Bairstow was dismissed on the last ball of the innings’ third over, Kumar’s second, as he moved across to glance one down to fine leg but was trapped leg-before.

England were 28/2 in three overs and it was the first time in the last three one-dayers against India that their openers couldn’t put up a century stand.

However, England didn’t give up.

Just like India earlier, which had come back from 157/4 to post 329, the visitors’ long batting line-up ensured that India had to face resistance. Dawid Malan and Liam Livingstone added 60 in 8.4 overs before Shardul Thakur made double breakthrough, getting rid of both.

Ali dazzled for a while before Hardik Pandya, who dropped two simple catches on the day, picked a nice catch to send him back. Curran and Rashid kept English hopes alive adding 57 in less than nine overs before the latter was brilliantly caught at short cover by Kohli.

Curran continued the onslaught reaching his half-century, farming the strike and then added 60 with Wood before the latter was run out while looking for a second run as Curran slipped.

The hosts had begun well with openers Rohit Sharma (37 off 37 balls) and Shikhar Dhawan (67 off 56 balls) adding 103 in just under 15 overs. The two began sedately before taking 15 runs off a Curran over, the innings’ fifth. They then took 17 off the eighth over bowled by left-armer Reece Topley.

However, the introduction of Rashid brought England back in. The England leg-spinner, who has made a habit of getting Kohli out in this series, removed Sharma in his second over with a googly that beat the India vice-captain. Rashid picked Dhawan in the next over, having him caught and bowled.

Soon, Ali, who was introduced from the other end, got rid of skipper Kohli (7 off 10 balls). The India No. 3 tried to play the off-spinner off the back-foot. However, the ball turned in and hit the leg-stump.

In the five overs between 15-20, India had scored 18 runs for the loss of three wickets.

England’s other leg-spinner Liam Livingstone then removed K.L. Rahul (7 off 18 balls) and India were 157/4 in the 25th over with backs to the wall.

From there on, Pant and Pandya took the attack to the England spinners. Pant hit Livingstone for a six and four to take 10 off his one over and then Pandya hammered Ali for three sixes in an over.

Both then kept milking runs before the India wicketkeeper was caught behind off Curran. Pandya was bowled down the leg-side by Stokes but by the time the Indian batting duo was dismissed, India were 276/6 in 39 overs.

Thakur (30 off 21) and Krunal Pandya (25 off 34) added 45 runs in seven overs. However, after Thakur’s dismissal, India could only make a further eight runs.

Man of the match: Sam Curran

Man of the series: Jonny Bairstow