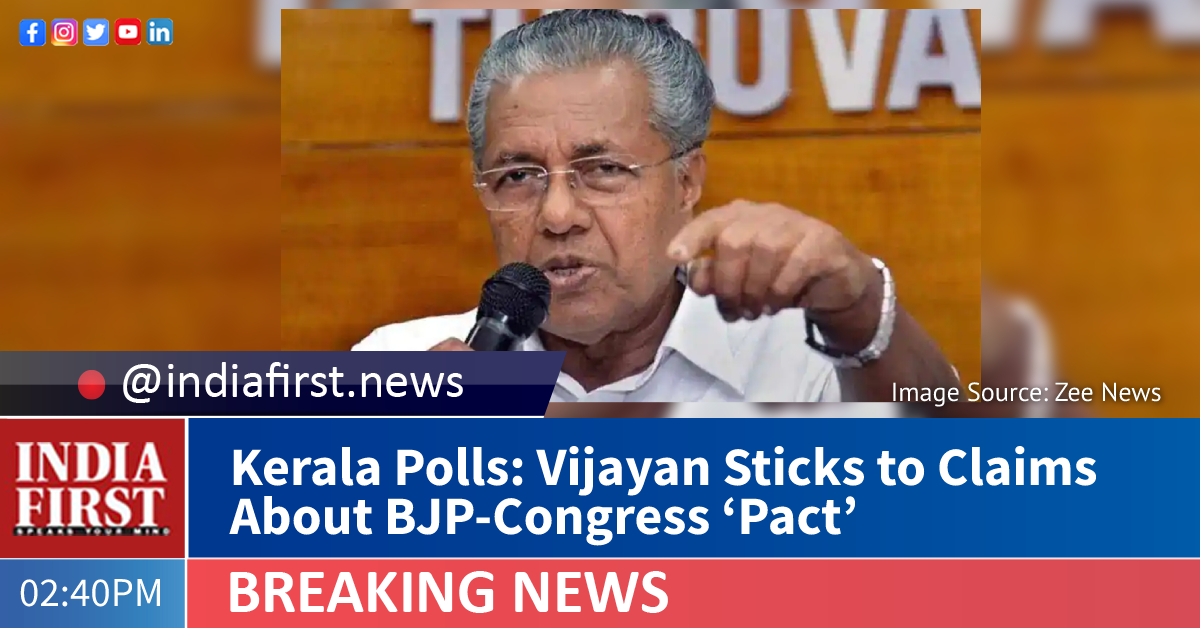 Continuing his stock statement, ever since the beginning of the Assembly elections campaign, Kerala Chief Minister Pinarayi Vijayan has reiterated today that the close relationship between the Congress-led UDF and BJP in the state has now become an overt relationship.

Kerala goes to polls on April 6 to elect its 140 legislators. The counting will be held on May 2.

“Gone are the days of the erstwhile covert deal known as Co-Le- B (Congress, League and the BJP) which was there in the yesteryears. Today the pact between them is out in the open and that’s what we have heard from one of the BJP leaders Suresh Gopi, who is also a candidate in the Assembly polls, saying that since they do not have their candidate at Guruvayoor – the Indian Union Muslim League candidate should win. Likewise in Thalassery in Kannur also they do not have their candidate and hence A.N.Shamsheer (CPI-M) should be defeated,” Vijayan told the media at Kannur.

Last week the BJP-led NDA got a shocker when the nomination papers of two BJP candidates at Guruvayoor and Thalassery and their ally-AIADMK candidate at Deviculam was rejected on technical grounds, making the electoral battle in these three constituencies a straight fight between the Left and the Congress.

“In hindsight if we now see all the things that have taken place, it’s become evident that the deal between the BJP and the Congress was fixed some time back. You would all remember that the Congress never ever said a word when Kerala was not given the sanction to receive funds from abroad when the state suffered the worst ever floods in 2018,” said Vijayan.

“Moreover, of late there has been a dent in the federal structure of governance, where it should be a strong Centre and a happy State. But if we look into what’s happening is central sponsored schemes share has been sliced by 15 per cent and it started in 2015-16. What the Congress should realise is it’s not gratis of the Centre, but the state’s right. Likewise, despite pleas, there was no special package for Kerala after the floods hit. When all this happened, the Congress never ever spoke a word against the Centre,” said Vijayan.

Each time Vijayan meets the media, he has been harping on this. Dismissing all this as humbug of Vijayan, the Congress top brass has been countering it by saying it’s Vijayan who has struck a deal with the BJP.

“The SNC Lavalin case in which Vijayan’s fate is hanging fire in the past few years at the Supreme Court has been postponed 26 times. Just look at the speed at which the gold smuggling and dollar cases was investigated by the various central agencies and when the probe reached the office of Vijayan, everything has come to a standstill. The people of Kerala know who is having what sort of relationship with the BJP, as it’s Congress which is fighting the BJP all over India, while the CPI-M is there only in Kerala,” said senior Congress leader Ramesh Chennithala.