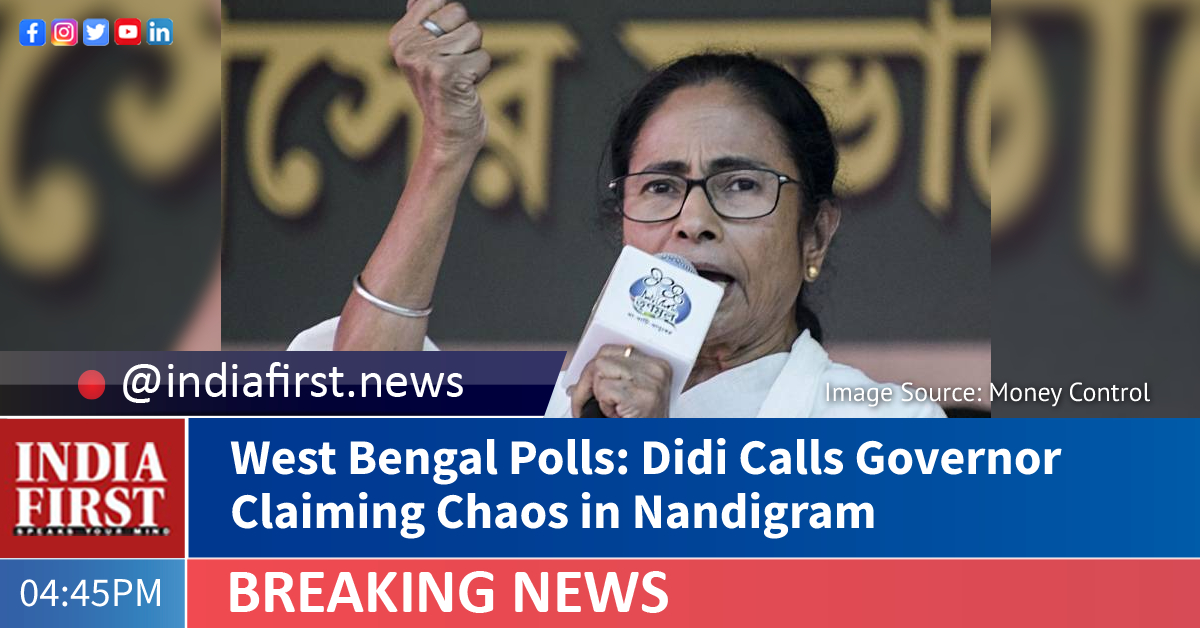 West Bengal Chief Minister and Trinamool Congress supremo Mamata Banerjee today dialled Governor Jagdeep Dhankar from Nandigram, from where she is contesting against BJP’s Suvendu Adhikari, alleging that there is complete breakdown of law and order.

The Governor assured that the issues raised by her will be looked into by those concerned.

“Issues flagged by Mamata Banerjee a while ago on phone have been imparted to the concerned. There is full assurance of the concerned to adherence to rule of law. Am confident all will act in right spirit and earnestness so that democracy flourishes,” the West Bengal Governor said from his official Twitter handle.

His remarks came after Banerjee called Dhankar over phone from Nandigram and said that anything might happen at any moment.

She also informed the Governor that there is total breakdown of law and order in the key constituency from where she is up against her protege-turned-rival Adhikari who dumped her for the BJP.

She also alleged: “People from other states are creating ruckus in Nandigram and I have lodged 63 poll-related complaints since morning, but no action has been taken by the Election Commission.”

While on phone with Dhankar, the Trinamool Congress leader alleged that people who are raising slogans are outsiders and they have came from Bihar and Uttar Pradesh.

Earlier in the day, Banerjee, who has been camping in Nandigram for past few days left from her residence around 1 p.m. and reached at a polling booth.

Voting in Nandigram is underway amid multiple allegations of disruptions by the Trinamool Congress.

Earlier in the day, Trinamool Congress Rajya Sabha MP and party spokesperson Derek O’Brien said, “BJP and their mind games! Won’t work. It is very obvious that they are sensing defeat. And all Trinamool Congress booth agents rock solid.

“Rock solid in 354 booths in Nandigram. We have registered complaints for 10 booths. All attempts by CRPF to influence or intimidate voters not working. People determined to have Mamata Banerjee as their MLA will become Chief Minister for the third time.”

In the morning, Trinamool Congress Lok Sabha MP Mohua Moitra in a tweet said, “More than 150 EVM machines malfunctioning since Phase II voting started this morning. Wish Election Commission had put half as much effort into ensuring no EVM glitches as it did into transferring police officials.”

Voting for 30 assembly constituencies is in progress in West Bengal, including Nandigram. Adhikari has claimed that by the time polling ends for the day, there will be over 80 per cent votes cast, given the serpentine queues that started since 5 a.m. two hours ahead of the polling began.