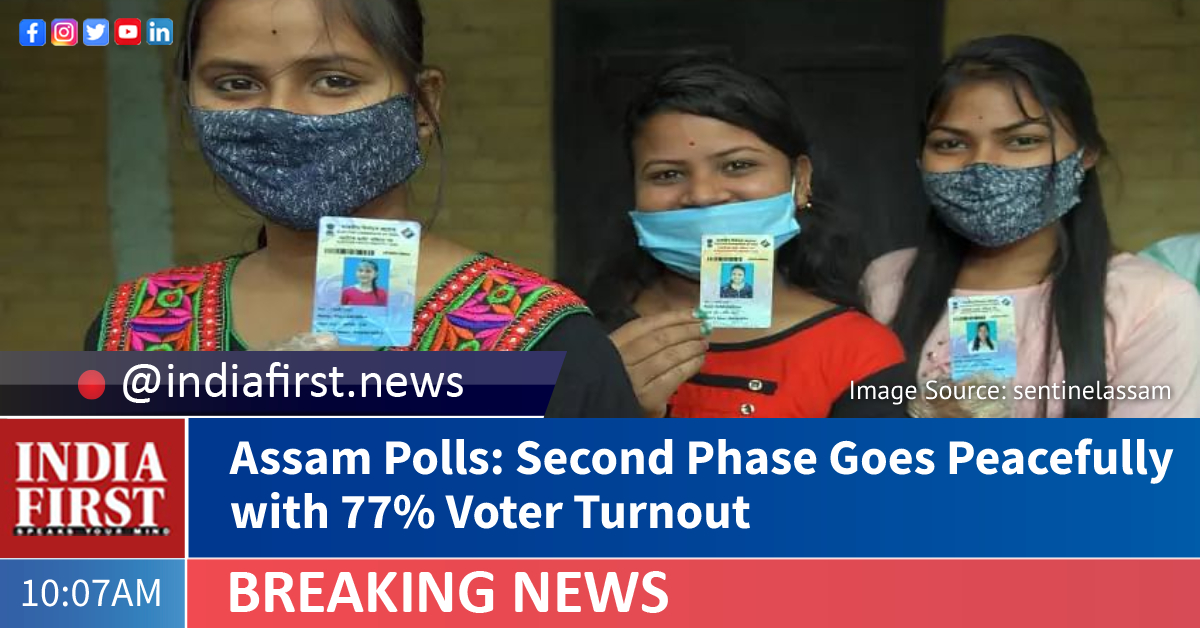 As many as 77.21 per cent of the 73,44,631 voters exercised their franchise in the second phase of polling in Assam yesterday, election officials said, adding that no untoward incident was reported from the 39 constituencies, where balloting ended at 6 p.m.

“The turnout of the electorate is 77.21 per cent. The percentage will increase a bit after the final compilation of reports from all the returning officers,” election officials said, adding that no incident of violence was reported so far from the 13 districts where the voting was peacefully.

In a few polling stations, voting was halted for some time due to technical snags in the Electronic Voting Machines (EVMs), which were soon rectified.

Men, women and first-time voters queued up in front of the polling stations in large numbers well before the voting began at 7 a.m. Polling time was increased by an hour till 6 p.m. by the election officials in view of the Covid-19 situation.

According to the Chief Electoral Officer of Assam, Nitin Khade, 73,44,631 voters, including 36,09,959 women, were eligible to cast their votes across 10,592 polling stations in the second phase that would decide the fate of candidates in 39 Assembly constituencies. As many as 556 polling stations were being managed by women officials.

Around 31,000 Central Armed Police Force (CAPF) personnel, along with thousands of state security force personnel, were deployed to maintain law and order during the second phase of polling in which 42,368 polling staff were engaged.

In yesterday’s polling, the electoral fate of 345 candidates, including 26 women aspirants, have been sealed.

Suklabaidya is contesting from Dholai for the seventh time on a BJP ticket, Hazarika from Jagiroad and Kalita from Rangia.

Former Congress minister Gautam Roy is contesting from Katigorah on a BJP ticket, while former Deputy Speaker Dilip Kumar Paul, who resigned from the BJP after he was denied a ticket and was subsequently expelled from the party, is contesting as an Independent candidate from Silchar.

In 2016, the BJP had bagged eight of these seats, while the All India United Democratic Front (AIUDF) won four seats and the Congress three.

The voters and poll officials were directed to strictly follow all the Covid-19 protocols. The election officials said that to avoid crowding, the number of voters for every booth had been brought down to a maximum of 1,000. As a result, the number of polling booths has been augmented by 34.71 per cent to 33,530 in the entire state from 24,890 in 2016.

Of the three-phase elections to the 126-member Assam Assembly, the third and final phase of polling will be held in 40 seats on April 6. The results will be declared on May 2.