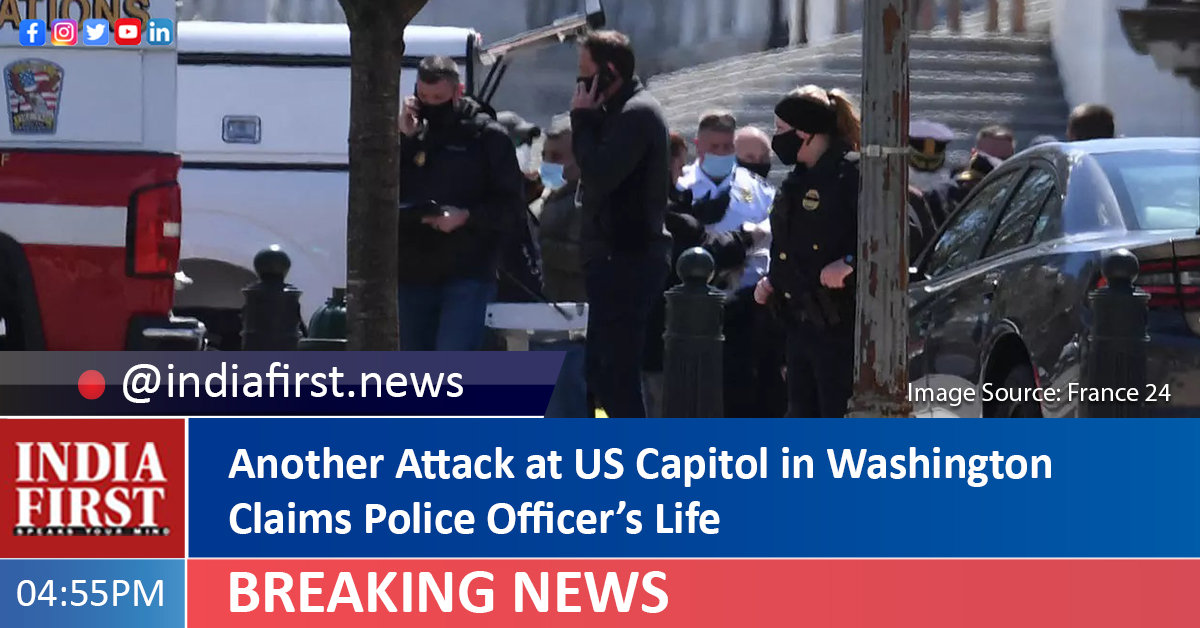 A vehicle attack at the US Capitol killed a police officer and the alleged assailant was shot dead by law enforcement, as Washington still reels from the violent January 6 riots at the Congress.

The man who allegedly carried out the attack yesterday afternoon was identified as Noah Green, a 25-year-old man from Indiana, who according to his Facebook posts is an adherent of the Nation of Islam sect, which has been denounced by mainstream Muslims and has no connections to the faith despite the sect’s name.

Acting Capitol Police Chief Yogananda Pittman said at a news conference that the car rammed two police officers at a Capitol checkpoint, killing one of them and injuring another.

The driver of the car came out wielding a knife and lunged at an officer who shot him, she said.

The slain police officer has been identified by Capitol Police as 18-year veteran William “Billy” Evans.

“It is with profound sadness that I share the news of the passing of Officer William ‘Billy’ Evans this afternoon from injuries he sustained following an attack at the North Barricade by a lone assailant.

“This has been an extremely difficult time for US Capitol Police,” Pittman said, noting the attack underscores that the Capitol Hill remains a potential target for violence.

This was the second line-of-duty death in the Capitol Police this year.

Two other Capitol Police officers have died by suicide in the wake of the riot.

The officer who was injured in the attack in stable condition at a hospital according to authorities.

The attack occurred about 91 metres from the entrance of the building on the Senate side of the Capitol.

Immediately after the attack the complex was placed under a lockdown. It was lifted two hours later.

House Speaker Nancy Pelosi, who hailed the slain officer as a “martyr for democracy”, ordered the flags at the Capitol to be flown at half-staff to mourn his death.

Vice President Kamala Harris called the attack “an inexplicable act of violence” and hailed the courage of the Capitol police she said that it comes “during a challenging period when they have faced two violent and deadly attacks”.

Following the attack, there was a heavy police response outside of the Capitol, which houses the Congress and offices of its members, including a helicopter landing on the premises.

The National Guard said that it was deploying an Immediate Response Force (IRF) made up of soldiers and airmen to the Capitol complex after the latest attack.

Following the attack, the Facebook page of the alleged assailant, who is non-White and claimed be a follower of the Nation of Islam leader Louis Farrakhan, was taken down, but a copy of it was made by heavy.com

In his posts, he spoke of his ambitions and said: “The path has been thwarted as Allah (God) has chosen me for other things.

“My face is centred on the belief of the Honourable Minister Louis Farrakkan as Jesus, the Messiah, the final reminder in our midst under the teachings of the Honourable Elijah Muhammad, brought forth by Allah.”

Farrakhan and the Nation of Islam follow a distinctive theology that is anathema to Muslims because it is not based on the Koran or the Islamic concept of Allah.

A key element of the Nation of Islam’s ideology is hatred of Jewish people and Whites. It has its own religious narrative about a paradise of Black people destroyed by a “scientist” who created the “White” devil.

Green posted on Facebook a certificate showing he had donated US$1,085 to the Nation of Islam and wrote that he is unemployed and “I’ve been faced with fear, hunger, loss of wealth and diminution of fruit”.

The attack on the officers manning the checkpoint at the Capitol happened amid controversy over the heightened security.

About 30 Republican members of Congress wrote to Pelosi last month to express “concern with the militarised fencing, excessive security infrastructure, and significant National Guard presence on the ground of the US Capitol”.

Mitch McConnell, the Republican Senate leader, said yesterday: “We could not be more grateful for the professionalism and heroism of the officers who neutralised this threat at the checkpoint and for the entire USCP (Capitol Police) force.”

An outer ring of fences was taken down last week, leaving the inner ring, and Friday’s incident reinforced the need for the unprecedented security brought in after the January 6 attack.

Barbed wire fencing has been set up around the Capitol complex since the riot.