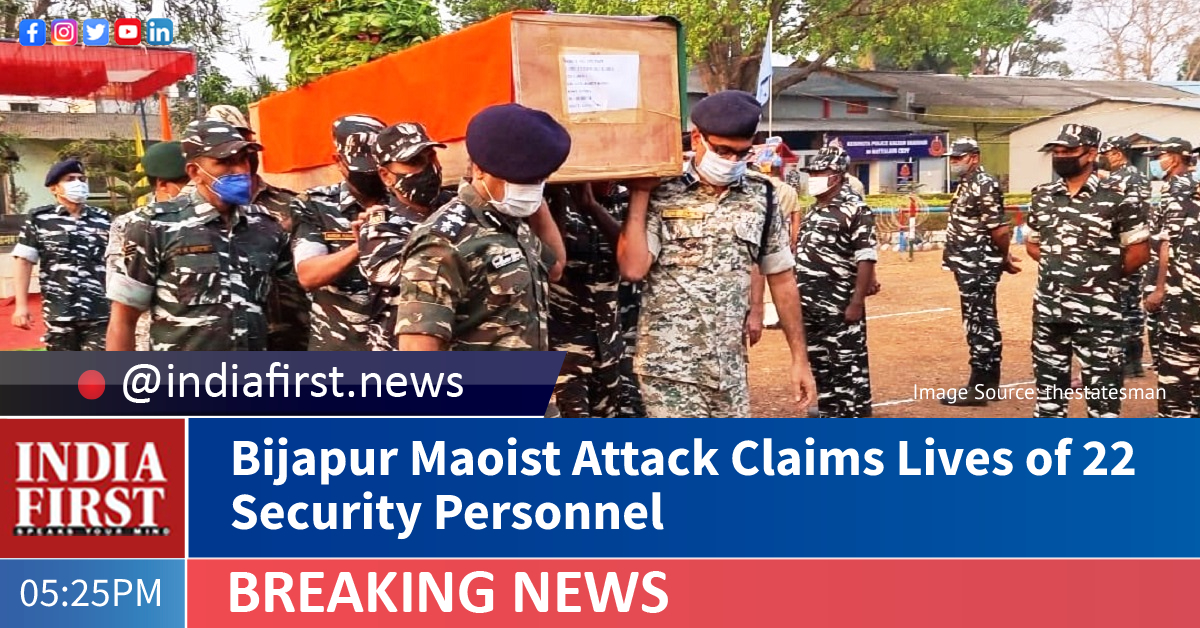 In a major Maoist attack this year, at least 22 security personnel were killed and 20 more injured in a fierce gun battle with a platoon of over 300 People’s Liberation Guerrilla Army (PLGA) in Chhattisgarh’s Bijapur, officials said.

As the identity of the security personnel is yet to be confirmed, both the state police and the Central Reserve Police Force (CRPF) confirmed that 22 bodies were recovered in a massive search operation.

Of the 22 personnel, nine belong to the CRPF, while the remaining are from state police’s District Reserve Guard (DRG) and the Special Task Force (STF).

Five of the 22 bodies of the security personnel were recovered yesterday and the 17 more bodies were found out today after a massive search operation was launched by a joint team of the CRPF, DRG and the STF from early today. The Cordon and Search Operation (CASO) was still on.

These 17 security personnel, including seven from the CRPF, were missing since the operation concluded after around nine hour-long gunfight between the Maoists and a joint team of CRPF’s elite CoBRA (Commando Battalion for Resolute Action) unit and Chhattisgarh police’s DRG and STF.

The 20 injured personnel were stated to be out of danger and recuperating in hospital.

The officials confirmed that at least two bodies of the Maoists were also visible on the spot near the Tekulgudem village under Tarrem police station where the shootout began yesterday noon in a deep forested interior area. There are reports of heavy damage to the Maoists too.

Sharing fresh inputs received from the spot, CRPF Inspector General (Operations) C.G. Arora said a total of 22 bodies of the security personnel have been recovered so far from the spot.

“Besides, those five bodies recovered on Saturday, the identity of other 17 bodies is yet to be ascertained. Search operation is still on,” Arora stated.

Asked about the loss of such level, the official said the incident took place in a dense forested area in a core Maoist region.

“This is an interior place inside the jungle where access is very limited.”

Union Minister Amit Shah has cut short his poll campaign in Assam and is returning to Delhi in the backdrop of the Maoist attack in Chhattisgarh – an ambush similar to the one executed by the Maoists in Tadmetla in 2010 and Minpa in 2020 in which 76 CRPF and 17 security personnel were killed respectively.

Shah earlier in the day spoke to Chhattisgarh Chief Minister Bhupesh Baghel over the phone and had a detailed discussion on the gunfight with the Maoists.

During the conversation, the Chief Minister apprised the Home Minister of the ground reality of the encounter.

The Home Minister said the state and the Centre will jointly win the battle against the Maoists and assured the Chief Minister of all necessary help. He informed the Chief Minister that he had issued instructions to the Director General of CRPF to visit the site of the incident.

On March 23, five personnel of the District Reserve Guard were killed and several were injured in an IED blast – the first major Maoist attack in Chhattisgarh this year – in what the police said was a Maoist strike targeting a bus carrying more than 20 security personnel.