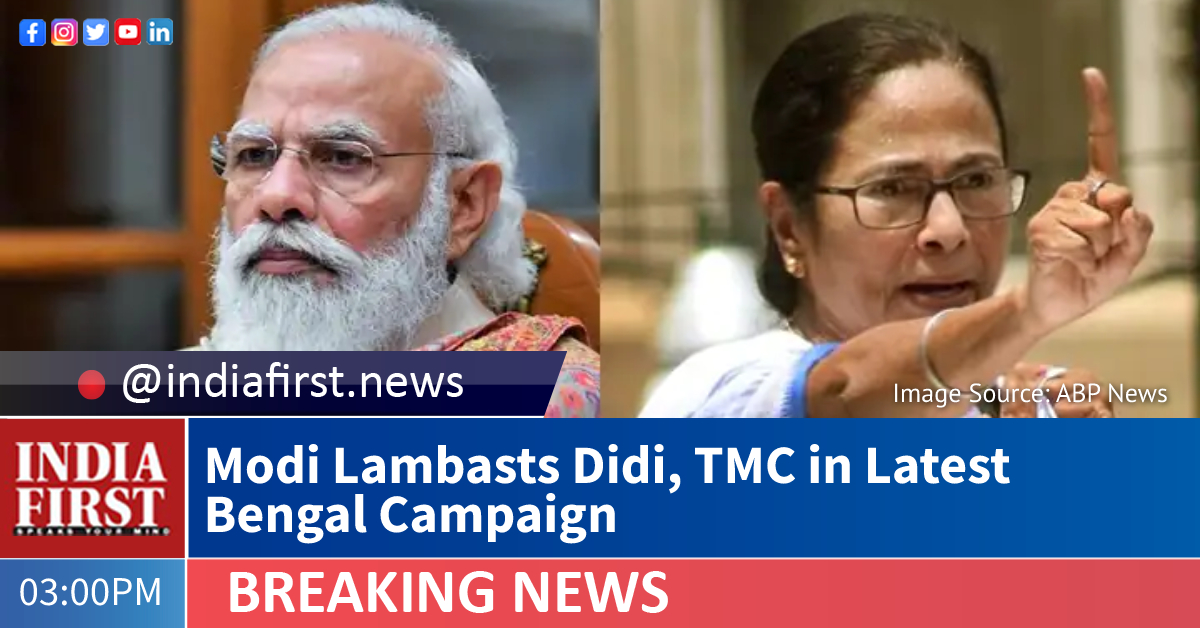 Launching a scathing attack on the ruling Trinamool Congress in West Bengal and Chief Minister Mamata Banerjee in particular, Prime Minister Narendra Modi said during his second election rally yesterday at Sonarpur in South 24 Parganas district that the cut-money culture and syndicate racket is hindering the growth of the state.

Holding back-to-back rallies in Sonarpur and Haripal in Hooghly district, Modi said: “The extortionists of Trinamool Congress hoarded the ration sent for the poor by the Centre. During Corona, the Centre sent 23 lakh metric tonnes paddy and one lakh metric tonnes pulses and for that the Centre had to pay nearly Rs 9,000 crore, but the Mamata Banerjee government didn’t allow the Central benefit to reach you. They hoarded the ration. The assistance sent to the state during Cyclone Amphan didn’t reach. It was also looted.

Urging that a double-engine government can only provide all the Central benefits to the people of Bengal, Modi alleged that the ruling Trinamool Congress is hindering the growth of the state.

“The Centre has developed 1,000 fast-track courts to give prompt justice to the women but it is not allowed here. The Centre provides free vaccination and Rs 1,000 for pregnant women but here the women are deprived of the benefit. The women don’t get the benefits of Central loan facilities because they will have to give cut-money for that,” the Prime Minister alleged.

Countering Mamata Banerjee’s allegation against the partisan attitude of the Election Commission of India (ECI), Modi said, “Why are you so angry with the ECI and the security people? Are you angry because they have not allowed you to give proxy votes? You should remember that 10 years before, they only gave you the chance to rule Bengal. You were happy then. Keep faith on the people.”

Suggesting that Banerjee contesting from Nandigram is a big mistake, the Prime Minister said, “There are rumours inside the party that she might contest from another constituency. She will lose in Nandigram and if she loses from the second constituency also, the Trinamool Congress can never come to power”.

Contesting her ‘outsider’ remark against the BJP national leadership, the Prime Minister said: “I have heard that she expressed her desire to contest from Banaras. She is always welcome because the people of Banaras and Kashi have a huge heart, just like the people of Bengal.

“They will never call her an outsider. But she will have to listen to ‘Har Har Mahadev’ every now and then. She gets irritated with the ‘Jai Shri Ram’ slogan. How will she tolerate that? One thing I can say that the people of UP will love her and accept her so much that they will not allow her to go to Delhi. She will have to stay there.”