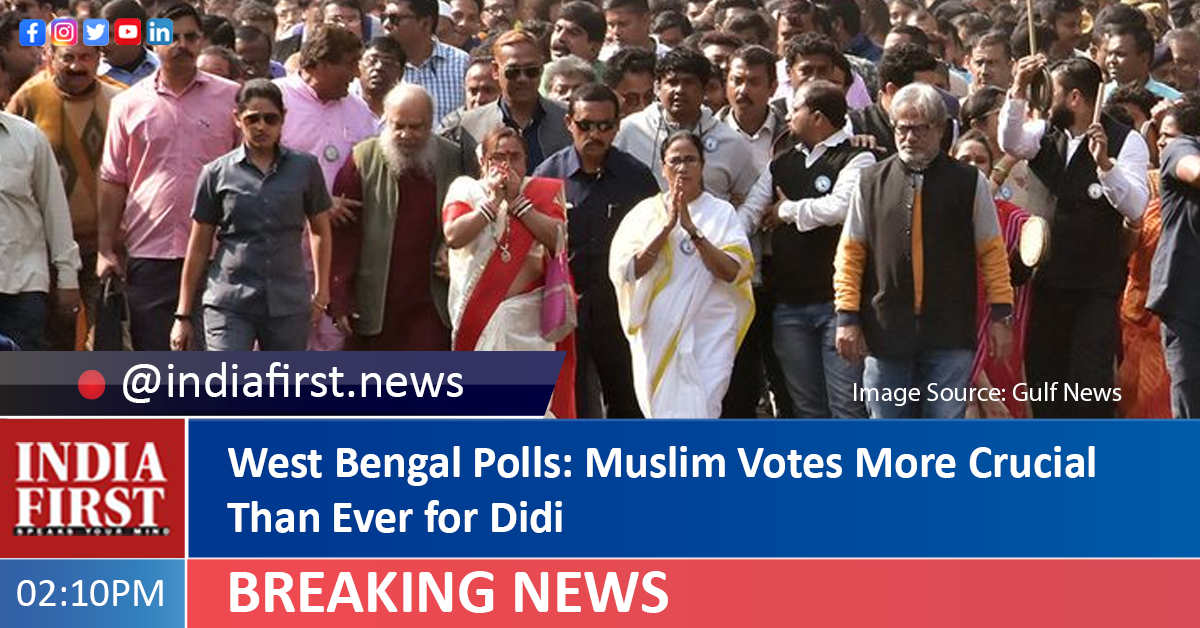 Perhaps no one has done so much as Chief Minister Mamata Banerjee to consolidate minority votes in West Bengal, but before elections for 75 seats in the crucial third and fourth phase of the election, in which minority votes might be a deciding factor, she is perhaps a bit scared about the probable split in minority votes that might not work in her favour the way it happened in the last two elections in the state.

The Chief Minister’s fears were evident in her recent speeches where she appealed to the electorate not to allow the person who is visiting Bengal from Hyderabad as he has received money from BJP and contest the West Bengal Assembly elections. She was hinting at All India Majlis-e-Ittehad-ul-Muslimeen (AIMIM) chief Asaduddin Owaisi, who is likely to contest the election alone. She also took potshots at Abbas Siddique, the cleric of Furfura Sharif, who formed the Indian Secular Front (ISF) and joined hands with Congress and the Left Front to contest the election.

“Stay calm…That Hyderabad party is coming and there is that talkative man from Hooghly. They are trying to divide the votes by giving money to the voters. Not a single vote should be divided no matter how much they petrify you. They are trying to divide Hindu and Muslim votes. What is Mamata Banerjee then? Hindu or Muslim?” Banerjee said in a political rally in Coochbehar district, where Muslims share a majority of the votes.

Before going for the analysis, a careful look at the demographic structure of the state will make the poll mathematics easier. According to the 2011 Census, West Bengal had more than 24.6 million Bengali Muslims, who formed 27.01 per cent of the population of the state.

Bengali Muslims form the majority of the population in three districts: Malda, Murshidabad and Uttar Dinajpur. However, Muslim votes make approximately 30 per cent of the total vote share of the state and it is believed that the consolidation of these minority votes in favour of a political party will make it easier for them to come to power. According to poll statistics, 125 of the 294 assembly seats in West Bengal have a strong Muslim presence, including Howrah, Birbhum, Murshidabad, North 24 Parganas, South 24 Parganas.

The Muslim vote bank is the bigger and a deciding factor in Bengal polls. For almost three-and-a-half decades, the Muslims were wooed and considered a vote bank by the Left Front, which ruled the state for 34 years running. The ‘Poriborton’ came when the TMC got into action and amassed the farmers, workers and Muslims, and especially the poor, during their Singur and Nandigram agitations and the Muslim started to shift their loyalty from Left to Trinamool congress.

Even as the Left Front was successful in retaining the Muslim vote bank and managed 45 per cent of the minority votes in 2011, the huge incumbency factor against the then government allowed Mamata Banerjee to come to power.

The shift of loyalty was strongly evident in Lok Sabha 2014 when the Trianmool Congress bagged 34 out of the 42 seats in the states with more than 40 per cent of the Muslim exercised their franchise in favour of Trinamool Congress.

The Left Front and the Congress collectively managed 55 per cent of the votes, but as they contested separately, Mamata Banerjee got the advantage of the division of the minority votes.

As per some survey reports, the BJP’s phenomenal rise was a result of its successful consolidation of Hindu and tribal vote bank. The BJP had an overall vote-share of 17 per cent in the 2014 Lok Sabha elections in the state, but that expanded to more than 40 per cent in 2019, owing largely to the party securing 57 per cent of the vote among Hindus.

With the Hindu votes going the BJP way, Mamata largely will have to depend on the Muslim vote and in case Siddiqui and Owaisi manage to snatch away Muslim votes from the Trinamool, the BJP might just have the last laugh.

On the other hand, if Mamata manages to retain the Muslim vote bank, she might have an edge over the saffron brigade.