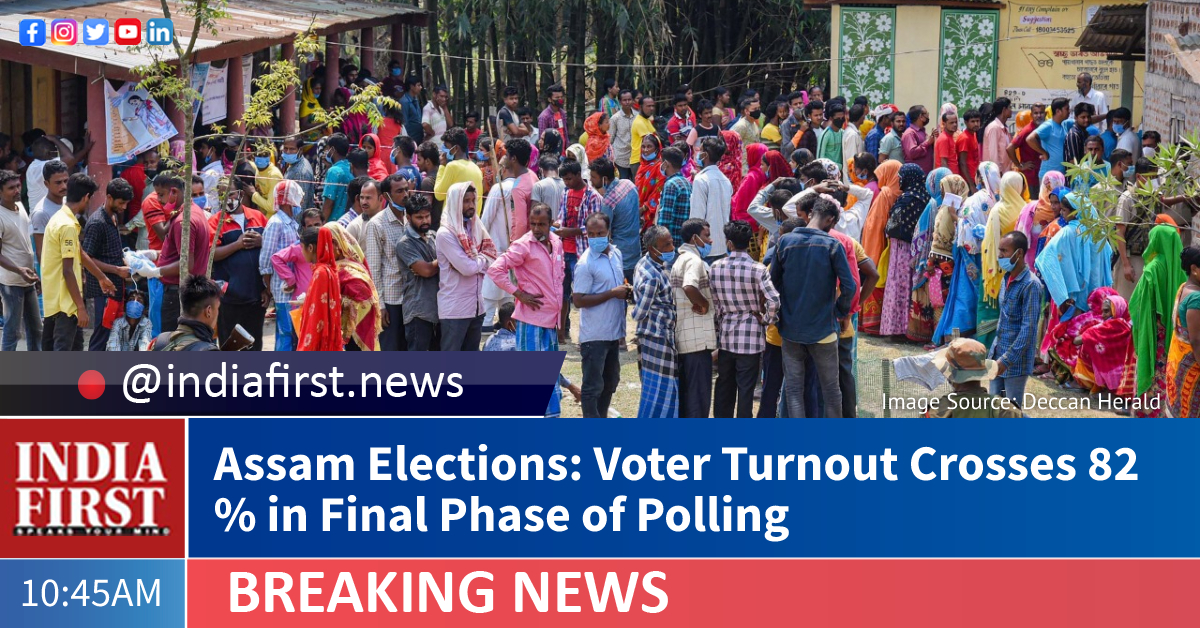 Curtains came down on the single-phase Assembly polls in Tamil Nadu and Puducherry at 7 p.m. yesterday. Polling was peaceful across the state and the Union Territory.

While computing the final turnout will take time, in Tamil Nadu, the voter turnout, as of 7 p.m., was 71.79 per cent. In Puducherry, it was about 81.60 per cent, officials said.

According to poll body officials, the above numbers are provisional while the final tally will be known later.

Voting was also held for the bypoll to the Kanniyakumari Lok Sabha seat.

In Tamil Nadu, a total of 3,998 candidates were in the fray seeking support from the 6.28 crore electorate.

Brisk polling was witnessed in a majority of the 88,937 polling booths in all the 234 Assembly constituencies in Tamil Nadu since the start.

Over 1.59 lakh electronic voting machines were in use and about 1.58 lakh security personnel were deployed to prevent any untoward incident.

From the movie field, Rajinikanth, star couple Ajit Kumar and Shalini, Surya, Karthi, and Sivakumar too cast their votes.

V.K.Sasikala, the close aide of late Chief Minister J. Jayalalithaa, could not vote as her name was removed from the electoral rolls, said her counsel Raja Senthoor Pandian.

Sasikala, who was jailed for four years on corruption charges, was released recently.

Meanwhile, charges and counter-charges were laid by political parties for violation of electoral rules.

In order to have a good voter turnout and also enable Covid-19 patients to vote, the poll body had allowed them to perform their democratic right by wearing personal protective equipment (PPE) kits.

Voters had to compulsorily wear masks, and thermal scanning was done at the polling booths.

Arrangements for live webcast of the polling process in sensitive booths were also made.

However, the main contest was between the ruling AIADMK-led alliance and the DMK-led front.

The others in the fray are actor-turned-politicians Kamal Haasan’s Makkal Needhi Maiam (MNM) alliance, Vijayakant-promoted DMDK, the alliance led by the AMMK floated by T.T.V. Dhinakaran and movie director Seeman’s NTK.

The AIADMK, led by Chief Minister Palaniswami, who sought a third term for the party while the DMK-led by Stalin sought to break the decade-long power drought.

The ruling AIADMK contested in 179 seats and six other small parties each contested in one seat each under its ‘Two Leaves’ symbol.

On the other hand, the DMK fought in 173 seats while alliance partner Congress in 25, the CPI, the CPI-M, the MDMK and the VCK contested six seats each, the IUML, and the KMDK three each, the MMK two, the All India Forward Bloc, the MVK, the ATP and the TVK one seat each.

A total of 187 candidates – DMK’s own and that of alliance parties – fought under the former’s Rising Sun symbol.

The Seeman-led NTK went alone contesting in all the 234 constituencies.

The other parties in the fray on their own were the Bahujan Samaj Party (contesting in 160 seats), the Puthiya Tamizhagam (60 seats) and the Republican Party of India (16 seats).

The Union Territory had just over 10 lakh voters and the fight for the 30-member Assembly was majorly between the United Progressive Alliance (UPA) consisting of the Congress (contesting 14 seats), the DMK (13), the CPI, and VCK (one seat each) and an Independent.

The rival National Democratic Alliance (NDA) comprised of All India N.R. Congress (16 seats), the BJP (nine) and the AIADMK (five).

Counting of votes will take place on May 2.