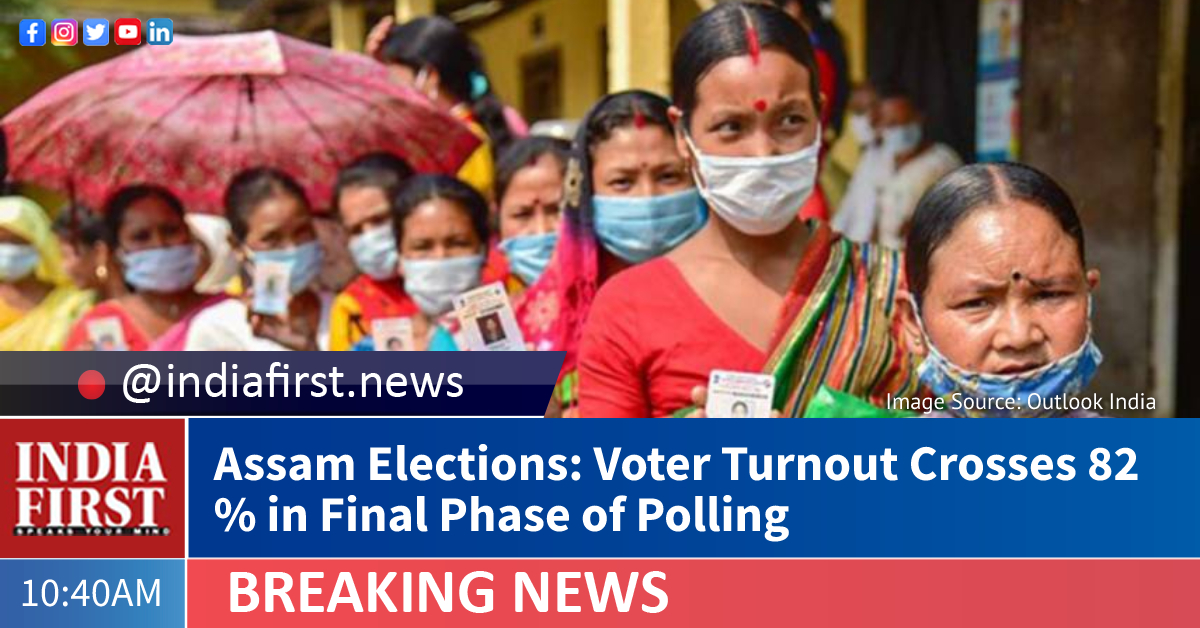 More than 82 per cent of the total 79,19,641 voters exercised their franchise in the third and final phase of the Assam Assembly polls, held in 40 constituencies amid tight security yesterday, according to election officials.

Election officials said that till 6 p.m., when voting officially ended, 82.28 per cent turnout was recorded but the percentage would increase a little bit after the reports of all the returning officers were compiled.

The final phase decided the fate of 337 candidates, including 25 women aspirants. All Covid-19 protocols, including social distancing and thermal screening were being maintained.

Election officials said that except some minor incidents, no major untoward incident was reported from anywhere of the 12 western Assam districts, bordering Bhutan, West Bengal and Arunachal Pradesh, where polling took place peacefully and smoothly.

The voters – comprising men, women and the first-time electorate – queued up in large numbers in front of polling stations well before they opened at 7 a.m. The Election Commission has extended an hour for polling in view of the Covid-induced situations.

Khade told the media that around 32,000 Central Armed Police Forces, along with thousands of state security force personnel, have been deployed to maintain law and order during this phase in which 45,604 polling personnel were engaged to conduct the polls.

Yesterday’s electoral battle was crucial for the ruling Bharatiya Janata Party (BJP) and the opposition Congress as both won 11 seats each in the 2016 Assembly polls. The BJP’s ally Asom Gana Parishad had bagged four seats, while the Bodoland People’s Front (BPF) and All India United Democratic Front (AIUDF) had secured eight and six seats, respectively.

Both the BPF and the AIUDF this time are part of the Congress-led ‘Mahajot’ (grand alliance). In the last elections, the BPF was with the BJP and the AIUDF fought independently.

Sarma, convener of the BJP-backed anti-Congress body North East Democratic Alliance, is contesting from the Jalukbari seat from where he has consecutively won since 2001.

Meanwhile, Dass is contesting from the Patacharkuchi seat. In the 2016 elections, he was elected to the Assembly from Sorbhog constituency.

Nearly 81 per cent of the 73,44,631 voters exercised their franchise in the second phase across 39 constituencies on April 1.