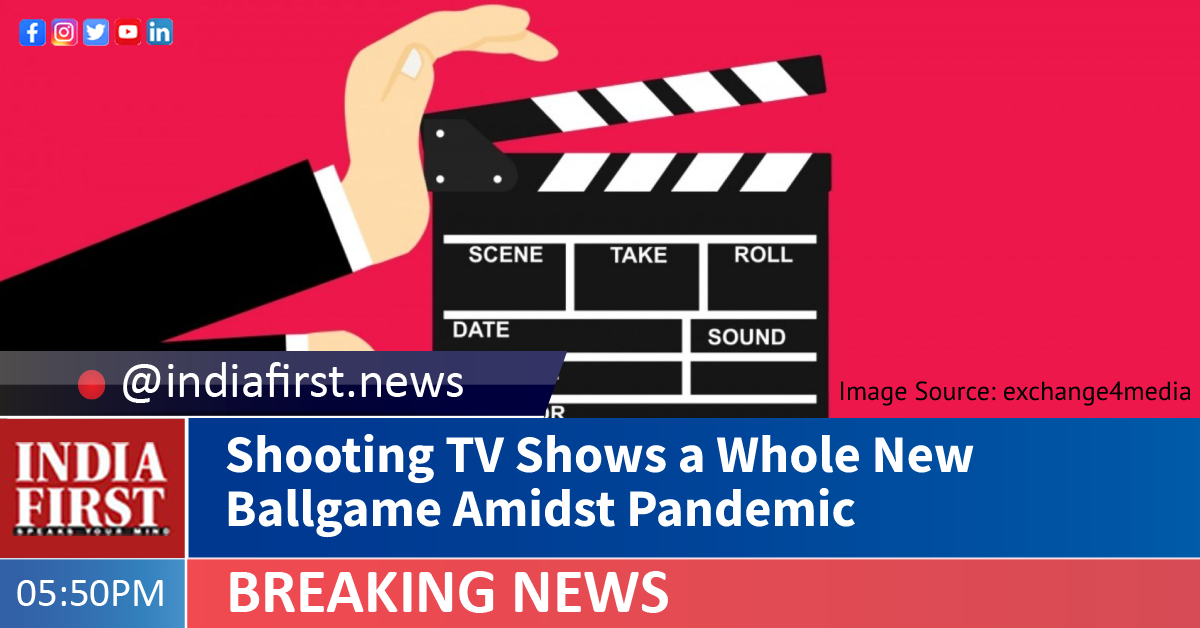 Getting ready for a soap shoot is no longer just about mugging dialogues and putting on make-up and costumes. In the ‘new’ normal that comes with restricted shooting permission in the wake of the second Covid wave, the process of creativity has to be made pandemic-proof, too.

So, for a start, TV series makers are focussing on the script. Writers are being told to visualise scenes that require less characters in every shot – a tall order, since Indian soaps are typified by a surfeit of protagonists filling up the frames.

Also, producers are creating episode banks by shooting episodes in bulk at a time, to ensure the flow remains intact in case a key cast member or two are out for a fortnight after contracting the virus. That, again, is quite a challenge, given the fact that television, more than the comparatively relaxed work culture of films or OTT, demands an unending flow of fresh programming to keep the show running.

The scene, after all, has not been rosy. Lately, there has been a rapid increase in Covid cases among television stars, perhaps because the community is forced to spend long hours together. Around 18 crew members of dance-reality show “Dance Deewane 3” tested positive. The list of television actors who have tested positive keeps growing – Shubhangi Atre, Abrar Qazi and Narayani Shastri, filmmaker Rajan Shahi and the lead actors of his show “Anupamaa”, Rupali Ganguly and Sudhanshu Pandey have all been infected with Covid-19. Actors Amar Upadhyay and Priyal Mahajan were diagnosed with the virus, too, in a span of a few days.

While every TV producer readily talks bio bubble, and insists social distancing is being maintained on the set, the industry is wary. Room for error will always remain for a virus threat that spreads quickly and shows no sign of ebbing.

Producer Binaifer Kohli, known for her shows “Bhabhiji Ghar Pe Hai” and “Jijaji Chatt Par Koi Hai” and “Happu Ki Ultan Pultan”, is among creators who believe that thwarting the entry of Covid into sets has to happen right from the start – the way scripts are written.

“TV shooting can continue with social distancing on the sets. Everybody is going to be tested via RT-PCR on the 10th of this month, that is before they get into the set. Distancing is possible if you plan your shooting well, take it in cuts, it can be done. The way forward is to write your story in a manner where there are lesser people in a scene and distance can be maintained,” she says.

“We always had strict restrictions and we are still following those. In fact, we had made some rules of our own, too,” she adds.

Others like director JP Sharma “Vignaharta Ganesha” talks of bulk shooting, to be prepared for a scenario when key cast and crew members might fall sick.

“We have a 10-episode bank. So, we don’t have to run around too much. We try to social distance. Every time, it’s not possible, but we try to do it,” says Sharma.

Agrees Kohli: “Episode banks are important. Right now, there is a Saturday-Sunday curfew, so two days are cut from the shooting. So, nine to 10 days in a month are out. Episode banks are very important. When someone falls ill, we have to shut down the set for three days,” she explains.

“Aapki Nazron Ne Samjha” producer Amir Jaffar, however, says that it is challenging to maintain an episode bank.

“It is tough as we will have to shoot the same number of episodes in five days, in reduced hours. Of course, once we start doing this, we will have a better idea. Right now, we are just trying to figure out how to go about this,” says Jaffar.

Director JP Sharma of “Vignaharta Ganesha” reiterates the importance of the simplest of solutions –  wearing masks for as long as possible on set – as the most effective tool against the virus.

“After getting ready from the make-up room, we try to keep only those people close by who are involved in the shoot. We are wearing masks all the time. After the cut, we tell the artistes to wear their masks, too” he says.

The basic diktat of social distancing, of course, is now a norm. “We have a monitor and we keep distance. We explain scenes from a two-foot distance. In the mornings, afternoons and nights, there is proper sanitising done,” informs Sharma.

For the small screen, the challenge is all the more intense. Every producer knows they have to shoot. The last year saw the OTT culture wean away a portion of the audience base. A few shows like “Qubool Hai” shifted base to the digital domain, too. Total shutdown of production really isn’t an option for TV producers right now.