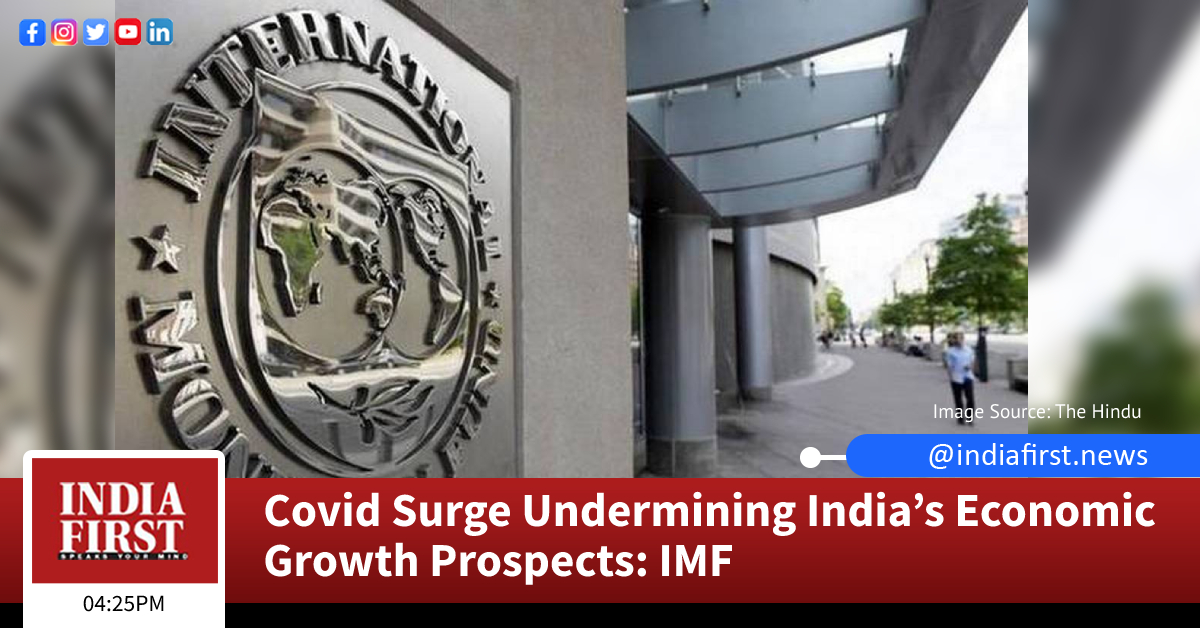 The new wave of Covid-19 infections sweeping parts of India is “worrisome” and threatens the 12.5 per cent growth projection, an International Monetary Fund expert for the region said yesterday.

Jonathan Otry, the Deputy Director of the IMF’s Asia Pacific Department, said that “the current surge in infections presents a worrisome downside” for India which “has seen a more sizeable upward revision to 12 and a half per cent on account of continued normalisation of its economy and a more growth-friendly fiscal policy”.

In projections made before the current spike in Covid-19 cases and released last week, the IMF had raised its estimate of India’s gross domestic product (GDP) growth by 1 per cent from the January projection to the historically high rate of 12.5 per cent – the highest in the world for large economies – during this fiscal year. The growth was projected to moderate to 6.9 per cent next fiscal year.

Otry said at a news conference that a faster vaccine rollout “will propel the economic recovery” around the region.

For this, strong international cooperation is needed to ensure adequate vaccine production and universal distribution at affordable prices, he said, praising India’s programmes.

“In this respect, the efforts of China and India have been commendable. And we hope, both countries continue to make supplies available to other countries, while ensuring adequate supplies at home,” he said.

While the Covid-19 pandemic may adversely impact efforts in some areas to combat climate change, he said that India has pledged to meet the Paris Climate Agreement goals and is even likely to exceed its commitments.

Otry also said that the recovery from the pandemic will be uneven across the Asia Pacific region.

China’s economy is projected to grow by 8.4 per cent this year, the second highest globally. Japan, in contrast will have a growth rate of only 3.3 per cent.

The rest of South Asia, excluding India, is also recovering despite the recent spike in infections because of higher-than-expected exports and remittances, he said.

The IMF’s growth projection for the South Asia region is 11 per cent.

Bangladesh is projected to grow by 5 per cent, Nepal 2.9 per cent, and Sri Lanka 4 per cent.

Pakistan, which is listed by the IMF in the Middle East and Central Asia region, is projected to have a growth rate of 1.5 per cent.

The two smallest South Asian countries are outliers in the growth projection for the region.

The Maldives, with a population of only 531,000 and a GDP of just US$5.6 billion, outperforms most countries with a growth projection of 18.9 per cent.

Bhutan’s economy is, however, projected to continue shrinking, registering a negative growth rate of 1.9 per cent. (Bhutan’s population is 763,000 and GDP US$2.5 billion.)

Among steps to be taken to ensure a strong recovery, Otry called for actions against “zombie” companies and support for “dynamic entrants”.

He said “corporate debt vulnerabilities, especially among small and medium enterprises, need to be addressed”.

“Balance sheet repair” should be facilitated to “enable zombie firms to exit, and allow dynamic entrants to thrive”, he said.

Otry emphasised the role of trade in the recovery.

“Easing of trade and technology tensions and facilitation of digital trade would also provide a welcome fillip to growth,” he said.

“To fulfil Asia’s potential for trade-led growth, restrictions that impede trade need to be reduced. These include tariffs and non-tariff barriers, such as quotas, subsidies, local content rules, and licensing requirements, where progress has stalled since the 1990s,” he added.