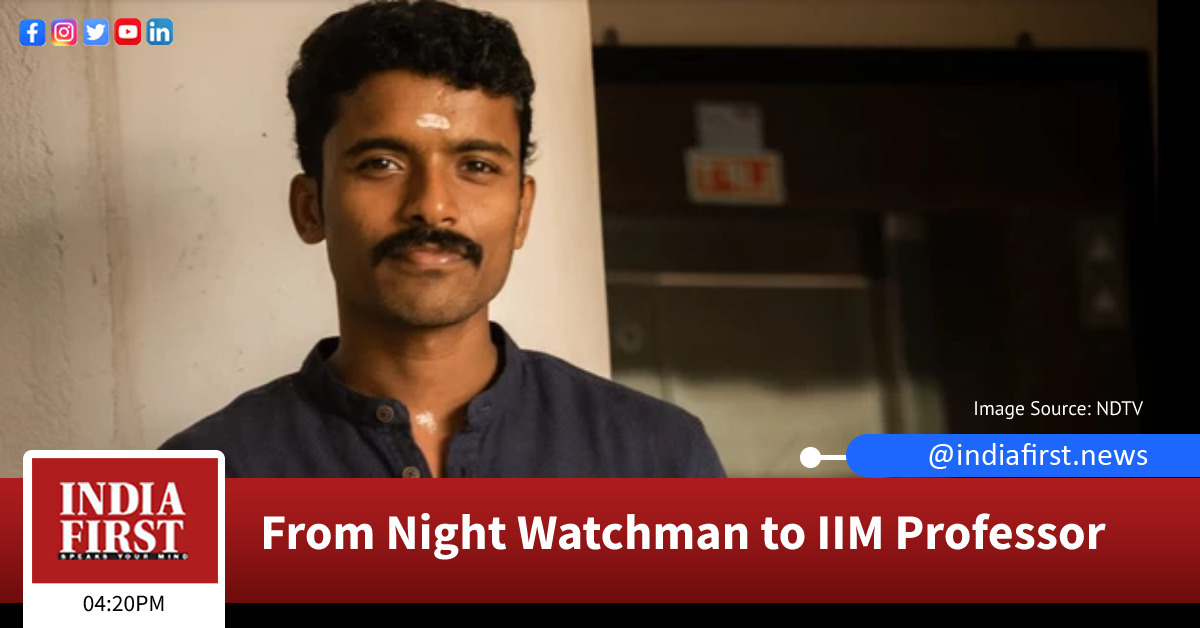 Ranjith Ramachandran, an Assistant Professor at IIM Ranchi, is a role model today. His struggle to get a get a good education and the fight to sustain himself to see his dream getting realised is being regarded as an inspiration to the society.

Ranjith lived in a dilapidated single room mud hut and worked as a night watchman for survival. His father is a tailor and mother a daily wage earner under the Mahatma Gandhi National Rural Employment Guarantee Scheme (MGNREGS).

He did his graduation at St Pious College, Kanhangad in northern most Kerala and worked as a night watchman at the BSNL exchange in Panathur, Kasargod district. He graduated in Economics honours and went on to study a doctoral degree at IIT Madras, one of the premier institutes of the country.

Ranjith, who writes himself as Ranjith K. Panathur, said that he was totally desperate after getting into IIT Madras as he knew no other language other than Malayalam. As communication was difficult, he wanted to quit, said Ranjith. However, Dr Subhash, his professor at IIT Madras encouraged him to continue, and now Ranjith has got a posting as Assistant Professor in the Indian Institute of Management (IIM) Ranchi.

After his doctoral degree from IIT Madras, Ranjith joined Christ University, Bangalore for two months and he got a posting at IIM Ranchi. In between he was also in the merit list for the selection of professors in Calicut university but could not make it.

In a Facebook post, Ranjith wrote extensively on the trauma and the tough life he had faced to meet two ends together and dedicates his success to the poor parents, who had given everything to make him what he is now.

The story of Ranjith, who comes from a remote village in the northernmost part of Kerala, is being appreciated as a hugely inspiring one, and he is being projected as a role model.

Kerala Finance Minister and a Doctorate in Economics from the Centre For Development Studies, Dr. Thomas Issac said, “Ranjith is an inspiration and from the moment he felt he was defeated, he turned his life and achieved success. He is an inspiration and role model, we have seen the likes of former President Late K.R. Naryananan who had defeated his circumstances with extraordinary will power and attained success.”

He adds, “Ranjith has used education as a tool to overcome the social and economic backwardness and climbed up the ladder of success and he is an inspiration, enabler and a role model for all the young children who seeks to attain success in life and they must understand that education is a major tool for success and to open newer pastures.”