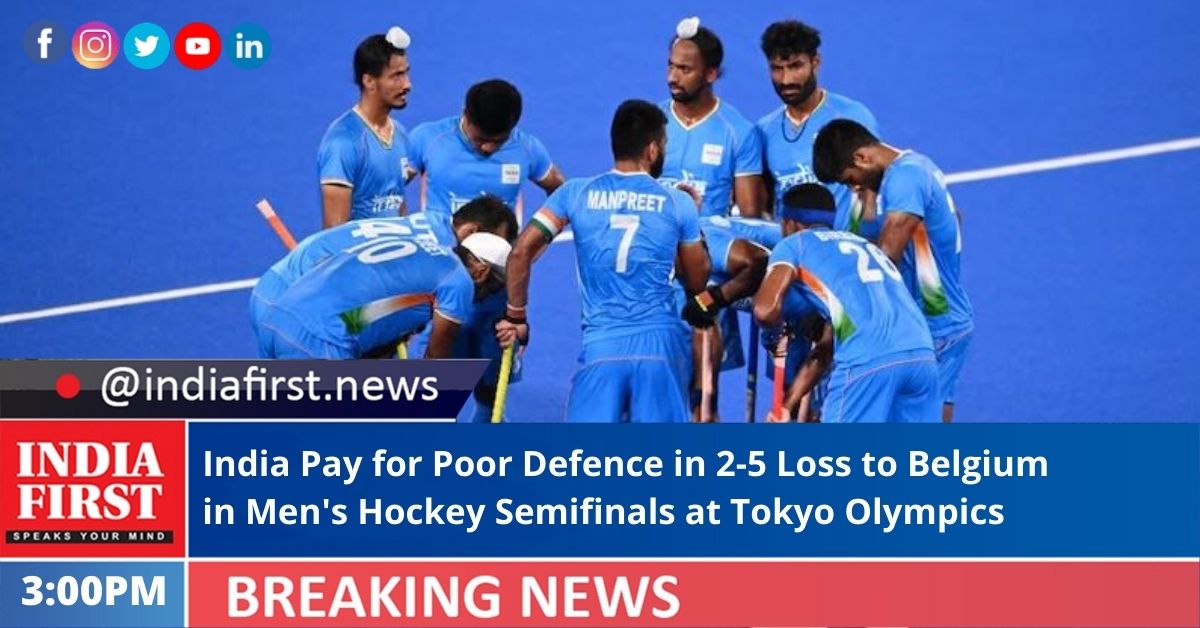 India’s brilliant run in the Tokyo Olympics men’s hockey tournament came to an end today with a 2-5 defeat to world champions Belgium in the semifinals.

The Indians fought well, went 2-1 up in the first quarter but slack defending and conceding too many penalty corners did them in as Belgium fought back to level the scores and then scored thrice in the fourth quarter to seal a place in the final.

Alexander Hendrickx, one of the most feared drag-flickers in the world, scored a hat-trick to seal Belgium’s victory. Hendrickx, who leads the scoring with 14 goals now, scored two off penalty corners in the 19th and 49th minute and converted a penalty stroke in the 53rd min to put the match beyond India’s reach. Loick Fanny Luypaert (2nd min) and John John Dohmen (60th min) scored a goal apiece for Belgium, while Harmanpreet Singh (7th min) and Mandeep Singh (11th) were the Indian goal scorers in the match that started at a fast pace.

Though the Indians lost the match, they were not disgraced as they matched the Belgians, who lost to Argentina in the Rio Olympics, for three of the four quarters.

The Indian attacks worked well in the first two quarters but the defence looked stretched from the start of the match – committing mistakes both in ideation and execution as the Belgians came back from behind and sealed a good victory.

The defence that did so well against Great Britain in the quarterfinals, committed basic errors in their eagerness to thwart the Belgians. Instead of tackling them outside the shooting circle, they tried to stop them inside. The Belgians played smart and, instead of going for field goals, created penalty corners to give their drag-flickers the opportunity to break India’s resistance.

Earlier, India got off to a slow start and conceded a goal early in the second minute when they earned the first penalty corner.

Loick Fanny Luypaert, Belgium’s second-choice drag-flicker lined up for an attempt as their top scorer Hendrickx – who has scored 11 goals before the semifinal – gave his team the lead as he flicked a brilliant shot into the left corner just inches away from the outstretched leg of Indian goalkeeper PR Sreejesh.

But the Indians got into their rhythm and started enjoying more possession, moving the ball up into the attacking third, earning their penalty corner when Gurjant sought a video referral for a foul by a Belgian defender.

India got the penalty corner in the seventh minute and Harmanpreet did not make a mistake to make it 1-1.

The Indians continued to press forward and took the lead in the 11th minute when forward Mandeep trapped cleanly in the circle a superb cross from Amit Rohidas, made a swift turn, and planted a powerful reverse hit into the goal.

India led 2-1 at the end of the first quarter but they could not sustain the pressure and Belgium started the second quarter on a positive note, pushing the rivals back. They earned four penalty corners in succession and managed to level the scores 2-2 when Hendrickx outthought Sreejesh with a deft last-second change of direction to put the ball in the goal.

Though the Indians enjoyed possession in the second and third quarter, Belgium slowly took control in the fourth as they looked for penalty corner off every opportunity they got. The Indians did make several attacks and circle penetrations but their pace had slackened and they started committing too many mistakes, giving Belgium too many chances – especially short corners that the Belgians thrive on.

India tried to reduce the margin but could not go on the attack immediately after Belgium’s third goal, hampered by a green card to skipper Manpreet Singh who was in the sin bin for two minutes. They lost their momentum and could not get back into the match despite pulling out goalkeeper Sreejesh for the last five minutes.

John Dohmen rubbed salt into the injury when he put the ball into an empty goal off a quick counter to drive the final nail into the dying Indian hopes.