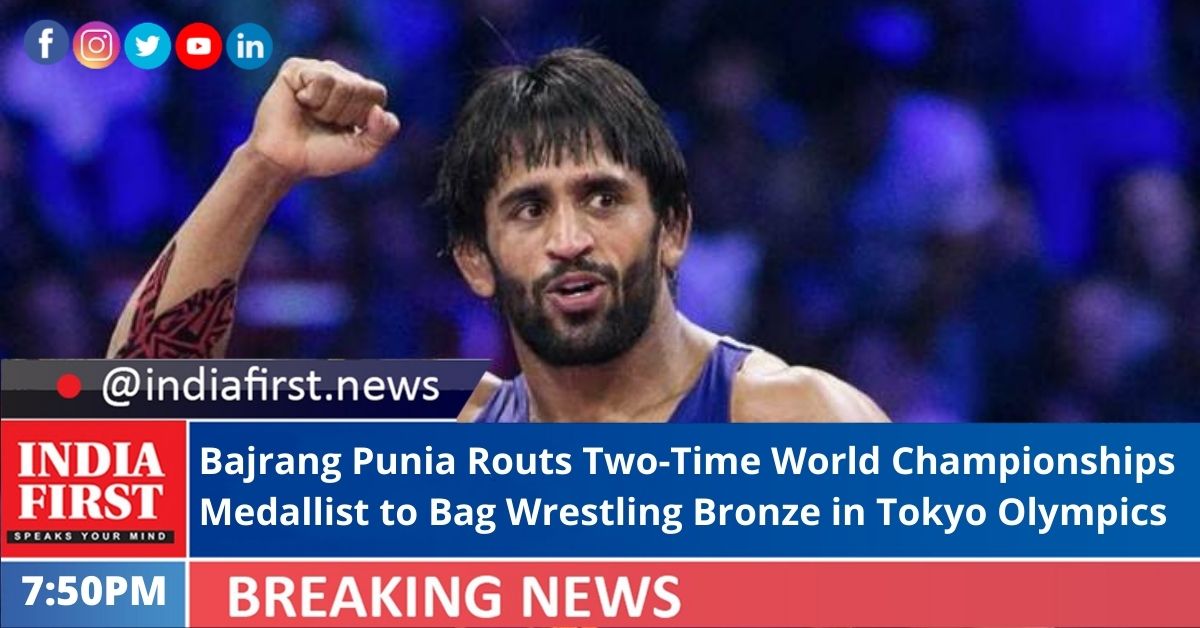 Bajrang Punia today added another chapter to India’s glorious history in wrestling history by winning the bronze medal in men’s freestyle 65kg, beating Niyazbekov of Kazakhstan 8-0 on points for his first medal at the Olympics.

Bajrang, who had lost to Haji Aliyev of Azerbaijan in the semifinals yesterday, came up with a tactical bout as he took early lead in the first period and capitalised with counterattacks when his Kazakh rival, a two-time medallist at the World Championships, went on the attack.

Punia’s bout also brought to an end India’s campaign in wrestling as they ended with a silver and bronze medal, the same as London in 2012.

Punia, who had opted out of the London Olympics in favour of his mentor Yogeshwar Dutta, finally claimed his first medal in his maiden Olympics, beating Niyazbekov comfortably at the Makuhari Messe Hall on Saturday.

Both wrestlers started the bout cautiously – Punia a bit circumspect because he had lost to Niyazbekov in the 2019 World Championships semifinals.

However, it was the grappler from Haryana who scored the first point through a passivity penalty on Niyazbekov, who had suffered another heartbreak as he had lost the bronze medal match in 2012.

The Kazakh tried hard to erase the deficit quickly and had Punia on the back foot but the Indian defended well to avert the danger.

Punia doubled his lead just before the end of the first period when he pushed his opponent out of bounds.

Punia could not have defended in the second period because the lead was too less. He dominated the final period and bagged six points, thus sealing the bronze medal.

He went on the counterattack as soon as Niyazbekov went on the offensive. He scored a two-point takedown to make it 4-0 and bagged two more points and followed it up with two more with good defence and counter-attack to seal the bronze medal.