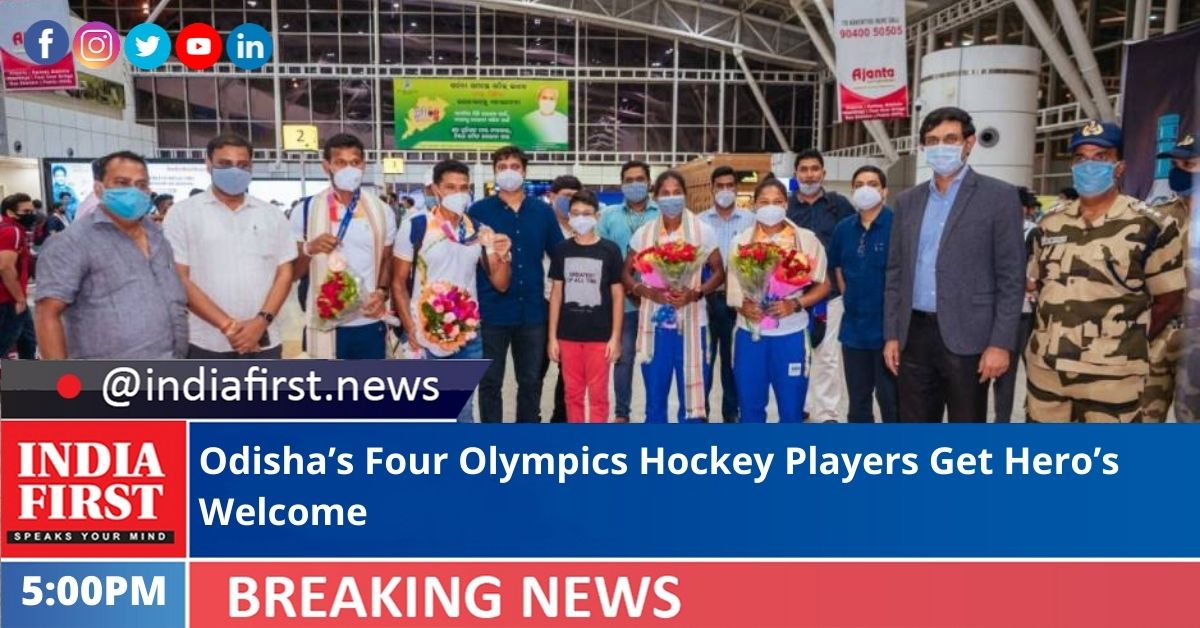 Following the Indian hockey teams’ outstanding performance at the Tokyo Olympics, a grand welcome was given to four hockey players from Odisha at the airport in Bhubaneswar last night.

After giving a historic performance at the Tokyo Olympics, Amit Rohidas Birendra Lakra, Deep Grace Ekka and Namita Toppo returned to their home state and a rousing reception – the traditional way – was given to them at the Biju Patnaik International Airport.

The state has been abuzz with excitement ever since their names were announced in the team squads and as they moved through the league stages and progressed into the knockouts, there was a sense of pride.

Once the teams scripted history, qualifying for the semi-finals, it became a moment of glory for Odisha too as the state has partnered with Hockey India to sponsor the Indian National teams, men and women, for a period of five years starting 2018 and support the players in their journey to excellence.

“While a dream campaign came to an end, it ushered a new era for hockey and Odisha is proud that players from the state are forever making their mark in the international platform and this time on they have brought glory not only for their state but the entire nation,” said Behera.

The Olympians have inspired a generation of young hockey players and Hockey surely will scale greater heights from here on, the minister said.

Welcoming the players, former captain and Indian hockey team, Dilip Tirkey said, “It is after 41 years that India has won a medal in hockey. The Indian women’s team has also performed exceedingly well against some of the top teams in the world at the recently concluded Olympics.”

“It is a matter of great pride for Odisha Hockey that four of our own played a significant role in making this miracle happen for India,” he said.

“I am feeling very happy at this moment and thank all for coming here in such a large number. I am also happy as we got a medal in the Olympics after a gap of 41 years,” Rohidas told reporters at the airport.

After reaching home, Birendra Lakra, the legendary defender from Odisha, said, “After 41 years, we won a bronze medal in the Olympics. We have tried for Gold, but we have not returned with empty hands.”

“After six to seven months, I have returned home feeling happy. Will try to give better performances for upcoming tournaments and to qualify for the next Olympics,” Lakra said.

“We felt sad and also cried on the ground after losing the Bronze medal from our hands. But, now we are feeling happy with seeing such a welcome in our State,” said Namita Toppo.