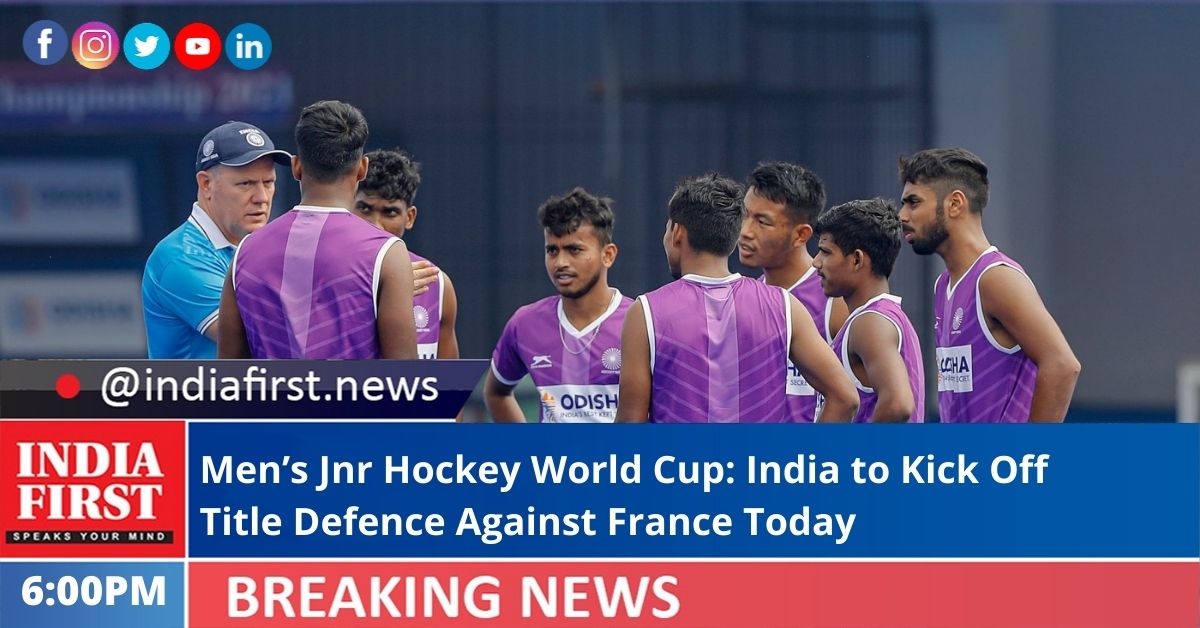 India’s preparations for the 2024 Paris Olympics, and medals beyond, will begin here with the mega sporting spectacle – FIH Odisha Hockey Men’s Junior World Cup – which is all set to kick-start today.

With the senior men’s team winning a bronze medal in Tokyo 2020 in August this year after a gap of four decades, Indian hockey lovers are now expecting the junior side to gain experience from here in order to change the color of the medal in 2024 Games.

Though there are nearly three years for the Paris Olympics, it is a fact that the current lot of junior players are likely to form the nucleus of that team and a good start in the World Junior Championships Bhubaneswar 2021 will put them on that route.

With big events like Commonwealth Games, FIH Pro League, and Asian Games lined up next year, chief coach Graham Reid will be trying many of these players in the next couple of years as he builds up a squad for Paris.

Chief coach Graham Reid, who has been made in charge of the junior team, said scouting for talented players for the senior team is a natural process and some of these players have an opportunity to make it to the senior team in near future.

Meanwhile, as the world’s top teams gather in Bhubaneswar, all eyes will be on hosts India and the question uppermost on their minds will be whether they can defend the World Junior title they won in 2016 at home in Lucknow.

India are among the 16 teams that have been divided into four groups of four each and will play in the preliminary stage in a round-robin format with the top two teams from each group qualifying for the quarterfinals.

The hosts are in a relatively easier Pool B with France, Poland, and Canada as their opponents. And they will start their campaign against France in the last match of the opening day on Wednesday.

With the field depleted due to the absence of Australia, England, and New Zealand – all three withdraw citing the Covid-19 pandemic, India have a very good chance of retaining the title.

Though the Junior World Cup started in 1979 in France, India did not participate in the initial competitions, making their debut only in 1997 at Milton Keynes (England) and reaching the final in their maiden entry.

They found further success in the 2001 edition at Hobart when they won the title beating Argentina 6-1 in the final. India went without any success in the next three editions but found success again in Lucknow when the team coached by Harendra Singh beat Belgium in the final to win their second title.

“Certainly, our objective is to make that final game. To put ourselves in that category we first need to win the first three games in our Pool. So, we will be taking each game as it comes. That’s the first objective. After that, obviously, if we end up in the quarter-finals and then the semi-finals, we’ll go from there. But certainly, we aim to be there at the end,” India coach Graham Reid said on the eve of the opening match.

Led by seasoned Vivek Sagar Prasad, India have a strong side that has some very talented players. The players have been together for nearly a year, part of the camp at Bangalore where they have played many matches against the senior men’s team. They have some very talented players defender Sanjay, also a drag-flicker, Maninder Singh, Yashdeep Siwach, who will form the nucleus of the team.

Skipper Prasad, who won the FIH Young Player of the Year award for 2020, has a lot of experience having been part of the Indian senior team since the 2018 Commonwealth Games.

France, on the other hand, are facing an uphill task considering the huge difference in the standard of play and rankings – India are ranked third in the world while France are 13th. They will however take heart from their performance in the 2013 edition in New Delhi when they reached the final, losing to Germany 5-2. The main aim for them will be to finish second in Pool B and take up things from there.

France coach Aymeric Bergamo said they know that they face a difficult task against India but was confident of his boys doing their best. “We know it will be a tough game, we know that India are a big nation in field hockey and we know that we have to be ready for the big opponent. I want my team to play as a team and as for the result, we will see,” he said.

“Our mission is to play each match to the best of our ability, and for that, we need a lot of mental strength. We want our hockey team to get out of the group stages and, if we succeed, we will do everything in our power to continue.

“My squad is particularly young and, for the most part, they don’t have any experience of high-level competition like this one. But the magic of playing hockey in India has been beneficial for French teams in the past, and this group wants to succeed together as a team,” he added.

With the tournament being held in an empty stadium because of strict Covid-19 protocols, the home advantage will be minimal for India and as there won’t be vociferous support from the crowd.