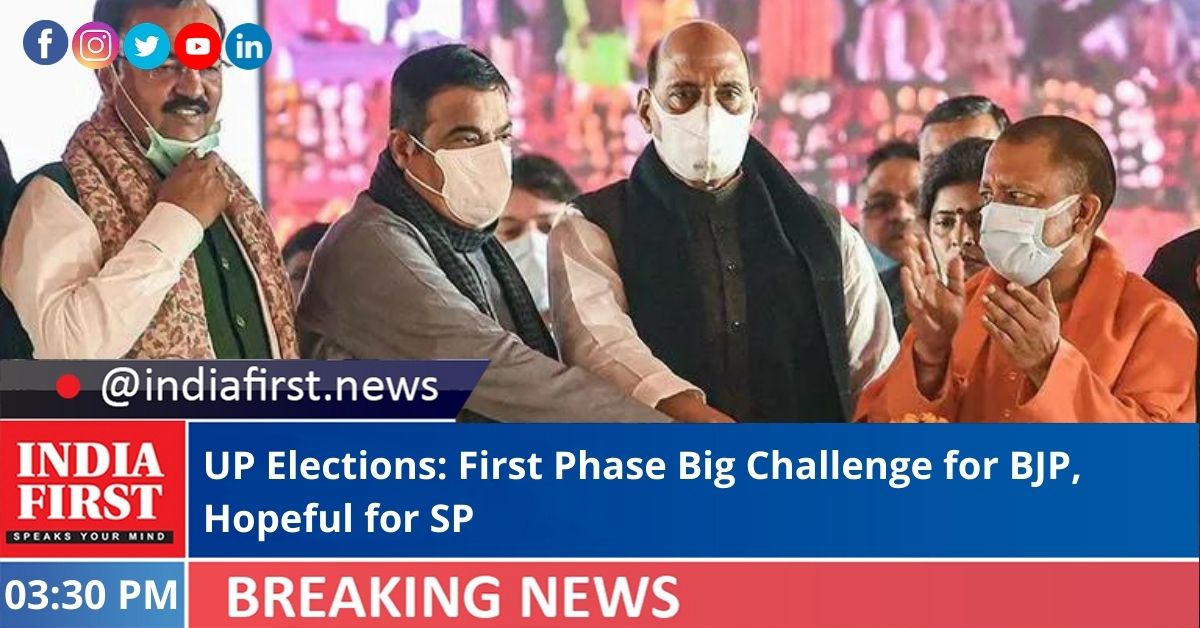 There is a battle for the BJP in western Uttar Pradesh, hope for the Samajwadi Party and revival for the Rashtriya Lok Dal in the region that goes to polls in the first phase on February 10.

The region, considered one of the most politically sensitive, surcharged and highly polarised areas, especially after the farmers’ agitation, will set the tone for elections in the remaining six phases in Uttar Pradesh.

In the 2017 Assembly elections, BJP had received a decisive mandate in the region and carried that momentum further to other parts of the state.

The BJP, in 2017, had won 66 of the 76 seats in this region. The Samajwadi Party (SP) won four, the Bahujan Samaj Party won three, the Congress won two and the Rashtriya Lok Dal could win only one.

The scenario has changed almost completely in the past five years.

The wounds of Muzaffarnagar riots of 2013 have healed to a large extent and the Jat-Muslim hostility has diluted. The communal lines have blurred and farmer unity is now a bigger factor in the region. Religious polarization is unlikely in the region in the present scenario.

The BJP has been trying to placate the farmers by repealing farm laws but its own leaders are queering the pitch by announcing that farm laws will be brought back after the elections.

It has been a tough going so far for the BJP whose leaders have been facing hostile voters in the rural interiors of the region. The failure of the government to announce MSP guarantee, payment of cane dues, shortage of fertilizer and the menace of stray cattle are factors that remain major irritants for the ruling BJP. The government’s apathy towards families of farmers who died during agitation, is another major factor.

The biggest political beneficiary of the farmers’ agitation that lasted for one year, however, is the Rashtriya Lok Dal.

The RLD president Jayant Chaudhary has managed to regain lost ground among the Jat community to a large extent by extending active support to farmers during their agitation. Jayant has been visiting villages, attending Khap meetings and interacting closely with Jat leaders.

The demise of Chaudhary Ajit Singh in May last year, has also brought ample sympathy for Jayant and his party is poised to make a political comeback in west UP.

The Samajwadi Party, this time, is contesting the elections in alliance with the Rashtriya Lok Dal. It had allied with the Congress in 2017 but could not make much headway as Jats, then, had opted for BJP because the wounds of Muzaffarnagar riots were still fresh.

The SP, this time, is confident of riding piggyback on RLD’s growing popularity graph.

The partnership could give a tough fight to the BJP in many parts of western Uttar Pradesh.

Besides, SP chief Akhilesh Yadav’s uncle Shivpal Yadav will be contesting in alliance with the Samajwadi Party and this will help avoid a split in his key vote bank.

One factor that could upset Samajwadi Party calculations in the first phase is the entry of Asaddudin Owaisi’s All India Majlis-e-Ittehad-ul-Muslimeen (AIMIM).

The party could play an important role in many constituencies as the Muslim population in this region amounts to around 26 per cent.

If the AIMIM succeeds in weaning away Muslim votes — or even a section of votes — the SP-RLD alliance may not perform as well as expected.

The first phase in western UP is also crucial for the Bahujan Samaj Party since the region was once considered as a party stronghold.

This time, the emergence of Bhim Army which will be contesting as Azad Samaj Party is bound to damage the BSP which, in any case, is being questioned for Mayawati’s absence in its campaign.

Mayawati, has, so far, restricted herself to tweets and press releases but has not stepped out of her home to campaign.

The Congress, on the other hand, is losing leaders with an alarming frequency. Congress national secretary and one of its more popular leaders in the areas, Imran Masood, is all set to join the Samajwadi Party.

Masood, a former MLA, has been repeatedly urging the party leadership to join hands with the SP to defeat BJP.

Harendra Malik and Pankaj Malik of Congress have already quit the party to join the SP.

The women card of the Congress is unlikely to work in western UP where the patriarchal system still dominates the society and women claimants in elections are few and far in between.

One thing that is clear is that any party that takes a head start in the first phase where 94 seats — almost one-fourth of the total 403 seats — will be going to polls, will enjoy a definite advantage in the remaining six phases of elections in Uttar Pradesh.