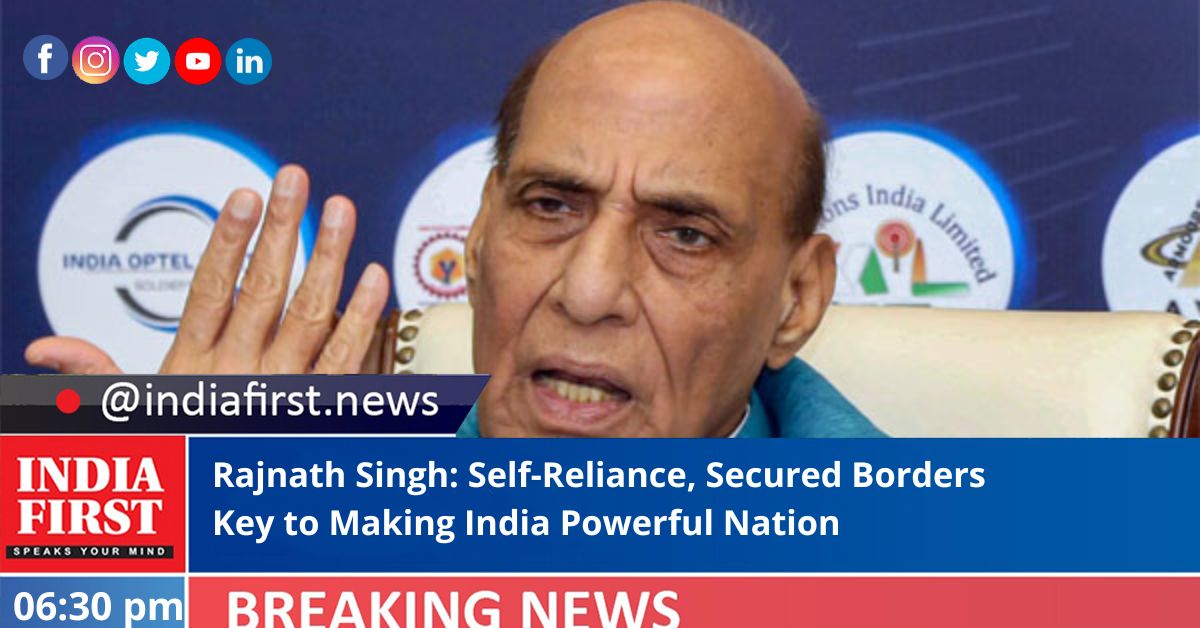 While addressing the inaugural session of the Conclave 2022 here, minsiter Singh echoed the government’s unwavering resolve to transform India into one of the most powerful nations by 2047, asserting that Ministry of Defence (MoD) is leaving no stone unturned to achieve Prime Minister Narendra Modi’s vision of ‘Aatmanirbhar Bharat’.

Singh underlined the Government’s focus on equipping the Armed Forces with state-of-the-art weapons and equipment, manufactured by a self-reliant defence industry and listed out a number of steps taken by MoD to reduce dependency on imports, including issuance of positive indigenisation lists. Citing the example of recently-commissioned INS Vikrant, which contains 76 per cent indigenous content, he stated that India has the ability and capability to manufacture modern weapons and platforms.

“There was a time when India only exported defence equipment worth Rs 1,900 crore. The figure today has crossed Rs 13,000 crore. We have set a target of Rs 1.75 lakh crore of defence production by 2025, including Rs 35,000 crore worth of exports. We are well on course to achieve the target,” he said.

Terming border area development “another” aspect at the core of the Government’s vision, Defence Minister Singh said that all efforts are being made to increase connectivity with far-flung areas to further strengthen the preparedness of the Armed Forces and linking the country with people residing in the region.

He termed North-East as the arm of India which was ignored for a long time after independence. He asserted that the progress of the North-East has been one of the major focus areas of the Government since the beginning as the region is crucial for the economic, social, political and strategic development of the country.

“Our greatest achievement in the last 8.5 years has been the restoration of peace & prosperity in the North-Eastern states. Since 2014, there has been about 80-90 per cent reduction in violence incidents in almost every state of the North-East. Most of the extremist organisations have either been rooted out or have surrendered and joined the mainstream. The Armed Forces (Special Powers) Act has been removed from 80 per cent of the areas. This was made possible as now there is peace, stability and durability in the region,” the minister said.

Talking about the Indian economy, he said the country’s economy has become more dynamic and stronger. He added that the number of start-ups in the country has increased manifold to 75,000 from just 400 in 2014. Of these, more than a 100 are known worldwide as unicorns due to their valuation of $1 billion, he said.

“Today, most of the countries are facing the problem of a slowing economy. The International Monetary Fund (IMF) has projected its global GDP growth rate to be 2.9 per cent in 2022-23. While India’s growth rate has been underestimated, it is still pegged at 6.1 per cent. The world is looking up to India’s growth story, he stated.