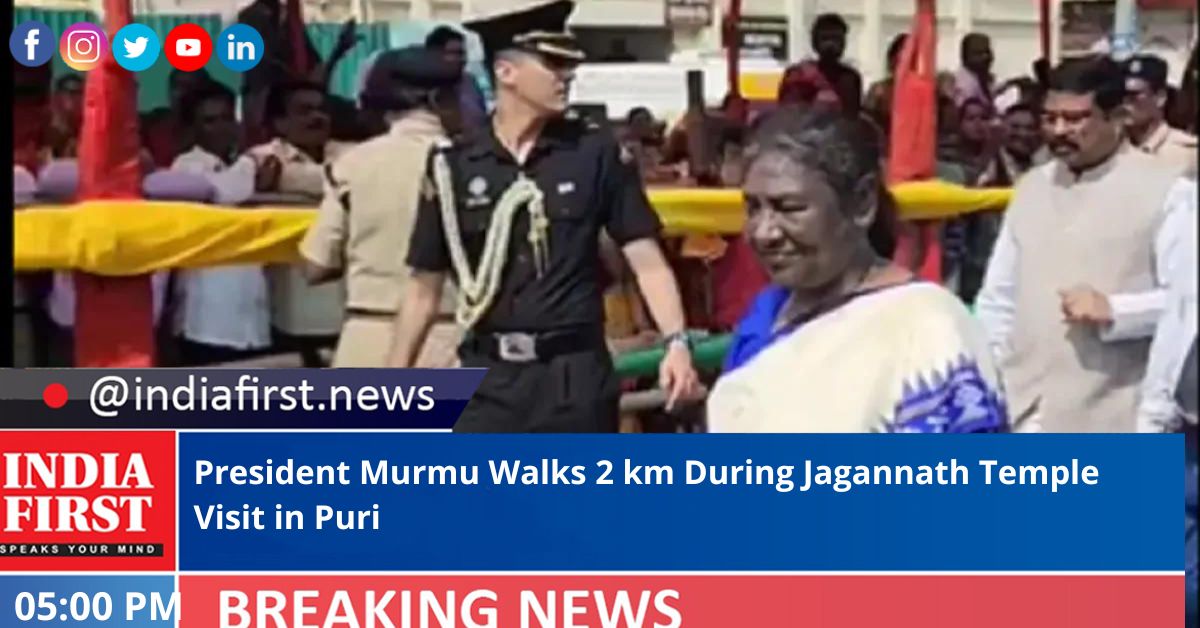 In a rare gesture, like an ordinary devotee, President Draupadi Murmu, on Thursday, walked about 2 km on Puri Grand Road while visiting the Jagannath temple.

This is her first visit to Odisha after assuming charge of the top constitutional post of the country in July. She started her tour by paying obeisance at the Jagannath temple.

While moving towards the temple, the President stopped her convoy near Balagandi Chhak on the Grand Road and walked about 2 km to reach the temple. After reaching the Badadanda, Murmu offered her prayers to Lord Jagannath.

Devotees greeted Murmu, the daughter of Odisha, on her way to the temple. Murmu met

schoolchildren, who were standing near a barricade on the road and also posed for a photograph with them.

She entered the shrine after touching the Aruna Stambha. Through the Baisipahacha, she entered the sanctum sanctorum of the temple and prayed before Lord Jagannath, Lord Balabhadra and Devi Subhadra.

After spending about 30 minutes inside the temple, she came out and signed the visitor’s book with a message. Later, she went to Puri Raj Bhawan where Mahaprasad was served to her.

President Murmu reached Bhubaneswar this morning on a two-day Odisha visit. On her arrival, she was received by Governor Ganeshi Lal, Chief Minister Naveen Patnaik, and other top officials at the airport. The President was given a ceremonial guard of honour.

As per the schedule, she will return to Bhubaneswar in the afternoon, she will pay her tributes before the statues of prominent freedom fighters and leaders. The President is also scheduled to attend the civic reception which will be hosted in her honour at Raj Bhavan Bhubaneswar this evening.

Later in the day, she will launch various projects of the Union Ministry of Education from Jayadev Bhawan here before leaving for New Delhi in the afternoon.