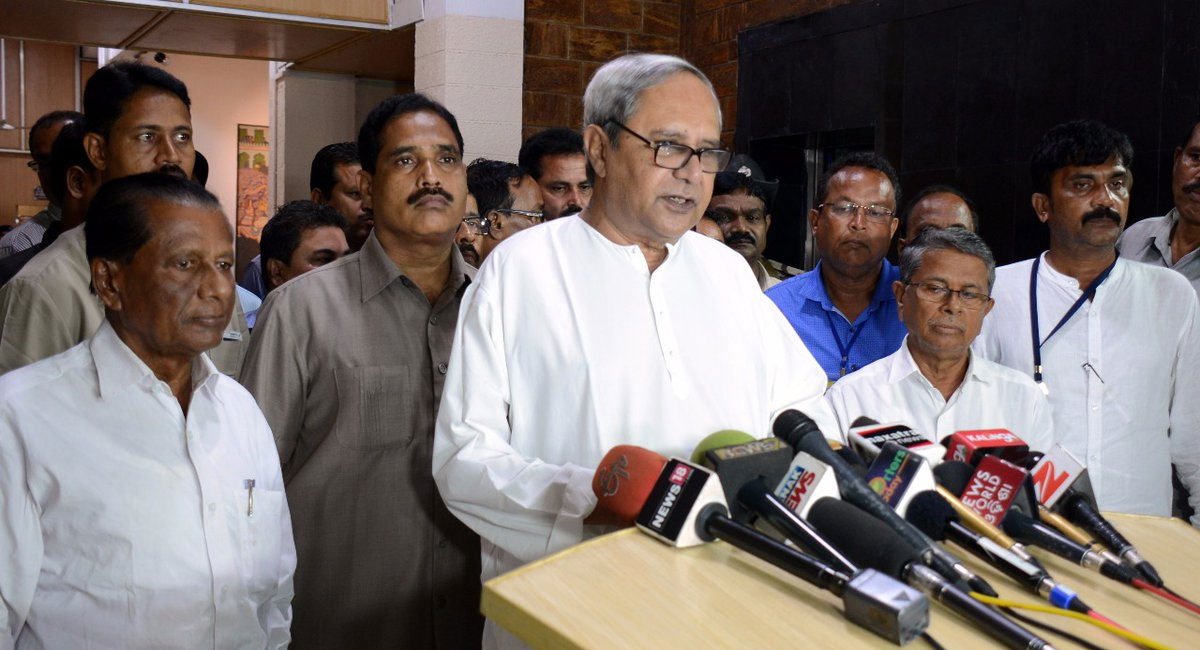 Amidst the rough and tumble of election time, Chief Minister Naveen Patnaik has proved once again why there is no alternative to him yet in Odisha

By the end of the first week of this month, a certain video from Bhubaneswar had become viral among Odia communities not just in India but across the world. It featured Odisha Chief Minister Naveen Patnaik’s morning exercise routine, in which he was seen doing sundry things – from stretching, to lifting weights, to riding a stationary bike, to jogging in the corridors and grounds of Naveen Niwas.

A little over two minutes long, the video was conspicuous by its unusualness on many levels. Sporting a black T-shirt and matching track pants, instead of the loose-fitting white kurta pyjama that he is always seen in, the usually reclusive and intensely private Biju Janata Dal (BJD) supremo was giving the world a rare peek into not only his sprawling official residence but also his personal space.

Noting its timing, many analysts reckoned that the video was not merely a warmup to the final round of BJD campaigning for the first phase of simultaneous elections to 21 Lok Sabha and 147 Assembly constituencies in Odisha. They averred it was mostly meant to dispel a notion, pushed forward primarily by Naveen’s critics and political rivals, that he was not in the best of health, which in turn implied that he was no longer fit to be the chief minister of the state.

A few days before the video came out, Bharatiya Janata Party (BJP) president Amit Shah had stated during an election rally in Odisha that the state needed a “younger chief minister”. It was not the first time that Shah made an ageist remark on the BJD boss – he had done so on a handful of occasions during his past visits to the state – and it would not be the last either.

In fact, just a couple of days after the video’s release, Shah was at it again.

While addressing election rallies in Aska and Bargarh Lok Sabha constituencies on April 7, the BJP president called for change in Odisha saying Naveen was looking “tired” and lacked the will to develop the state.

Shah claimed Odisha was unable to benefit from its vast reserve of natural resources because it was being run by the bureaucrats, with elected representatives of the people having little power in the Naveen Patnaik-led BJD administration.

“Modi government has given Rs 5.56 lakh crore to Odisha. But it hasn’t reached its people yet because it has been polished off by Naveen Babu’s people,” he alleged.

For the umpteenth time, Shah also slammed Naveen for his lack of fluency in the state’s mother tongue. “After 19 years of ruling the state, can Naveen Babu speak Odia? Choose a Chief Minister who can speak and understand your language and feelings,” he said.

Warning of more chit fund and mining scams if the BJD government were to return to power, the BJP veteran urged the people of Odisha not to repeat past mistakes if they wanted it to become a model state.

“You’ve given Congress and the BJD a chance to rule the state. Give BJP a chance and we will take Odisha on the path of development,” Shah assured.

A day earlier, Prime Minister Narendra Modi accused the BJD government of indulging in vote bank politics and keeping the Odisha underdeveloped and its people poor for its personal gains.

Addressing an election rally in Sonepur, Modi claimed that the farmers of Odisha were compelled to sell their produce despite the Centre having hiked the minimum support price to 1.5 times of the production cost.

Noting that the people of Odisha were continuing to migrate to other states in search of employment, the Prime Minister expressed wonder over why the state was lagging behind others in development despite being blessed with an abundance of natural resources.

He also assured that once the BJP came to power in the state, Odisha would be “recognised for tourism instead of migration of masses”.

Prime Minister Modi also pointed accusing fingers at the Naveen Patnaik administration while talking about water shortage in Odisha. He openly wondered how could that happen when the region was blessed with the Mahanadi and Tel rivers.

He conveniently overlooked, many political observers pointed out, the significant role that his own party played – both in Chhattisgarh and the Centre — in the exacerbation of the Mahanadi issue.

Meanwhile, Naveen stuck to his own script. So far he had mostly let his work, the performance of his government, do all the talking. When the time to speak came around election time, his counter-offensive to the opposition’s bizarre claims, chants and rants was facts-based, straightforward and hard-hitting – but never personal or below the belt.

Early this month when top leaders of the BJP and Congress were busy in an unprecedented spate of campaigning across Odisha, in which they were either dissing the BJD government left, right and centre or expressing extreme concern over the fate and future of the state, Naveen asked one profound question as he kicked off his own campaign trail for Lok Sabha and Assembly polls from his home district of Ganjam.

“Where were they when cyclones like Phailin, Hudhud, Titli and even drought hit Odisha? Now that it’s election time, they are coming here seeking votes,” he said.

All set to traverse the length and breadth of the state in his election-customised high-tech bus, Naveen also sought to remind the Modi government about its unfulfilled promises of creating two crore jobs annually, passing Women’s Reservation Bill, implementing insurance for farmers and giving special category status to Odisha.

On the very day that his fitness routine video released on social media, Naveen assured two instalments of Rs 10,000 each to 25 lakh farmers, under the Krushak Assistance for Livelihood and Income Augmentation (KALIA) scheme, immediately if the BJD were to form government again in Odisha.

During a poll rally in Jeypore, the Chief Minister declared that farmer welfare had been the topmost priority in the BJD election manifesto.

However, Union Petroleum Minister Dharmendra Pradhan promptly contradicted that statement with an outlandish accusation. During an election rally in Kalahandi Parliamentary constituency, Pradhan said that although the Chief Minister claimed to be providing money to 40 lakh farmers under the Kalia scheme, in reality it was the relatives and family members of BJD ministers and MLAs, not the poor farmers, that were actually benefiting from the money.

The Union Minister also once again accused the BJD government of deliberately delaying the implementation of the Pradhan Mantri Kisan Yojana that was meant to benefit the 40 lakh small and marginal farmers in Odisha who owned less than 5 acres of land.

The truth, however, was soon evident a few days later when the Chief Minister met the Chief Electoral Officer (CEO).

“I have come here to see the Chief Electoral Officer about the strong complaint of the election office stopping our government’s KALIA scheme for these farmers. This is most unfortunate as they have not stopped the agricultural scheme of the Central government,” an indignant Naveen told the press.

Explaining the dire need of KALIA scheme for the state’s farming community this season, the BJD chief expressed disappointment in the BJP’s complaint to the EC about the scheme’s implementation and warned that the farmers would give the saffron party “a befitting reply” for that.

A couple of days later, while addressing a rally in Nuapada, Naveen unveiled the election manifesto for women, promising Rs 5,000-crore worth of government work annually to the Self Help Groups (SHGs) under “Mission Shakti”.

He promised quite a few things: government jobs such as management of mid-day meal (MDM), public distribution system (PDS), paddy procurement, Ashram schools, hospital, transportation and supply of school uniform; accidental insurance facility for all members; and zero-interest loans up to Rs 5 lakh to all SHGs.

And he promised some more: free education for girls from KG to college level, including medical and engineering courses; a hike in medical assistance, from Rs 7 lakh to Rs 10 lakh, for women under Biju Swasthya Kalyan Yojana (BSKY); and marriage assistance of Rs 25,000 to poor families.

This has made political pundits certain that Odisha’s women will vote even more strongly in favour of the BJD than they had back in 2014.

However, it is not just the farmers and women whose interests are on top of Naveen’s mind; it is the people of Odisha as a whole.

This became clear as day as soon as the BJD’s election manifesto came out on April 9.

It suggested, quite presciently some may say, that no national party was going to get an absolute majority, as a result of which Odisha will have a bigger say in which party comes to power in the Centre.

“The BJD will support a government that backs the legitimate rights of Odisha. This will be our only agenda with the Central Government,” read the manifesto.

The manifesto noted that successive governments at the Centre had neglected Odisha, giving the state the least priority among all Central matters such as banking, telecom, railways and national highways. It also pointed out that the BJP had played a very “cruel joke” on Odisha by first promising the state Special Category status in 2014 and then forgetting all about it for five years only to make no mention of it in its present manifesto.

The BJD manifesto reasserted that Special Category status was the only way to redress all the historic negligence that Odisha had been a victim of.

The other big promise from Naveen is 75% reservation in jobs in all upcoming industries in Odisha for qualified local youth. The manifesto assures that 15 lakh youth will be skilled over the coming five years and one-time startup allowance of Rs 10 lakh will be provided to 10,000 eligible youth.

While unveiling the manifesto, Naveen stated that the BJD, unlike the BJP, fulfils all promises made in its manifesto.

In the concluding seconds of his viral video, the 73-year-old Chief Minister was seen saying that he was “getting ready to fight for the people of Odisha”. Truth be told, the BJD chief has always been doing that ever since he came to power after the turn of the millennium. Naveen has never seemed to take his electoral successes and his all-powerful position for granted in all these 19 years. The Odisha public knows it all too well. Therefore, no matter what opposition forces say or do this election season, there is little to stop him from becoming the Chief Minister for a fifth straight time.

Whatever the speculation about the motive behind the release of that viral video, it was but a nice and smart touch to an already rock-solid case that Naveen has made for his party before the public.