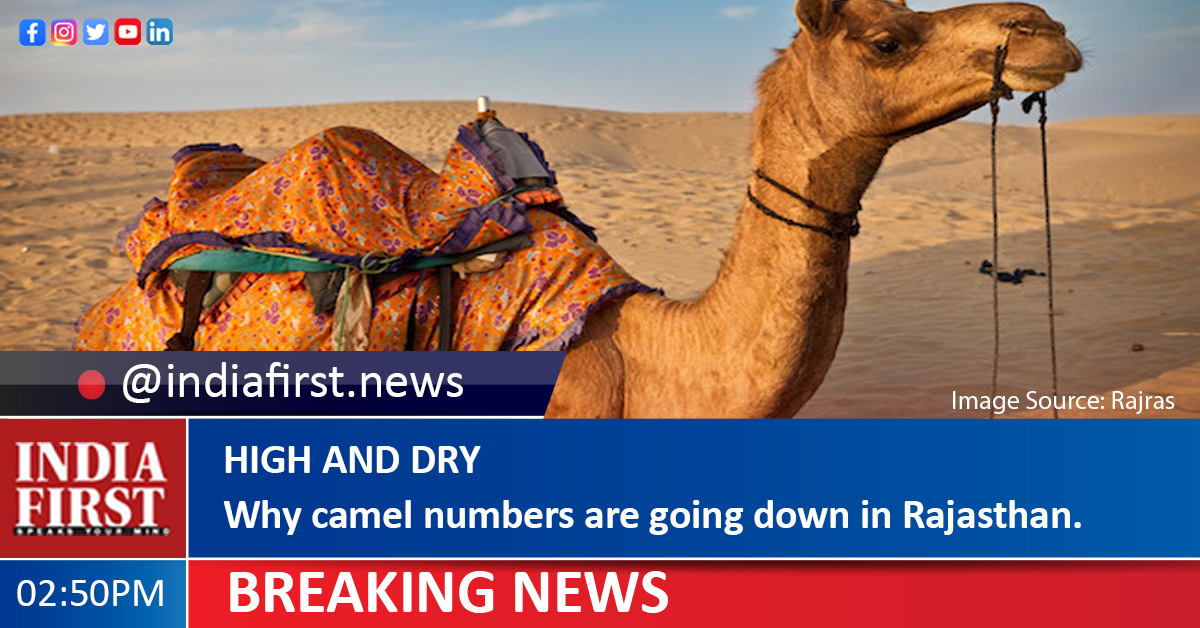 Why camel numbers are going down in Rajasthan.

As the camel population in Rajasthan witnesses a sharp decline, there are apprehensions whether the ship of the desert can weather the challenges it is facing and survive for the next five years.

Hanwant Singh Rathore, director of Lokhit Pashu Palak Sansthan, said: “If the government does not do anything in the next five years, camels will be finished in the desert state. There are many villages near Bikaner where there were 500 camels a few years ago. Today, there isn’t even a single camel around.”

In fact, till 1991, there were more than 10 lakh camels in the country, a number that has now declined to 2.5 lakh as of now, out of which the maximum number exists in Rajasthan.

Rathore listed multiple reasons for the decline in camel numbers. “First, the youth are disinterested in caring for these animals as they see no profit in it. Secondly, newer modes of transport such as cars, jeeps etc have replaced the camel as the preferred mode of transport. Thirdly, the government doesn’t seem to be interested in boosting the growth of this animal,” he added.

Rathore says at a time when petrol and diesel prices are soaring, why can’t the government promote the animal for the purposes of ploughing and transportation. “It seems that the government has no policy to save the animal,” he added.

The Lokhit Pashu-Palak Sansthan (LPPS) was founded in 1996 by Rathore in response to requests for support by Raika camel breeders in Pali District.

Rathore said, “When the camel was declared the state animal in 2014, we became hopeful that traditional breeders and caretaker communities and our animals would benefit. However, these hopes were dashed in 2015, when the Rajasthan Camel Prohibition of Export Act was passed. This has had a negative effect, which affected the camel population,” he added.

“The ban in the Act prohibits camel sales to any other state or country and was pushed arguing that camels were being sent to be slaughtered in Bangladesh. Camels were also sold to Haryana and neighbouring states, but now that has stopped. Now, camels taking goods across the state border have also stopped,” explains Rathore.

“We need to be able to sell our male camels freely, including to Arab countries where there is a demand for racing camels. So, remove the export ban for male camels immediately, although it can stay in place for female camels,” he added further.

Rathore says there needs to be a policy to sustain camels. “We have suggested to the concerned department marketing of camel milk and camel dung paper and asked officials to connect camels with the state’s heritage and culture or promote camel safaris through tourism. But the government, it seems, is not interested,” he alleged.

A senior government officer said, “The livestock sector is facing new challenges like increased incidence of emerging and re-emerging animal diseases, vulnerability to exotic diseases and shortage of feed and fodder. There is a need to increase production to meet the demand for animal products. To meet the challenges specific to the state and to avail the innovative opportunities available for the growth of the sector, a planned approach is required and we are working in that direction,” he added.