SHIFTING FOCUS Moving Over West Bengal, Congress has spelled out five guarantees for Assam ahead of assembly elections there. | India First e Newspaper Skip to navigation Skip to content 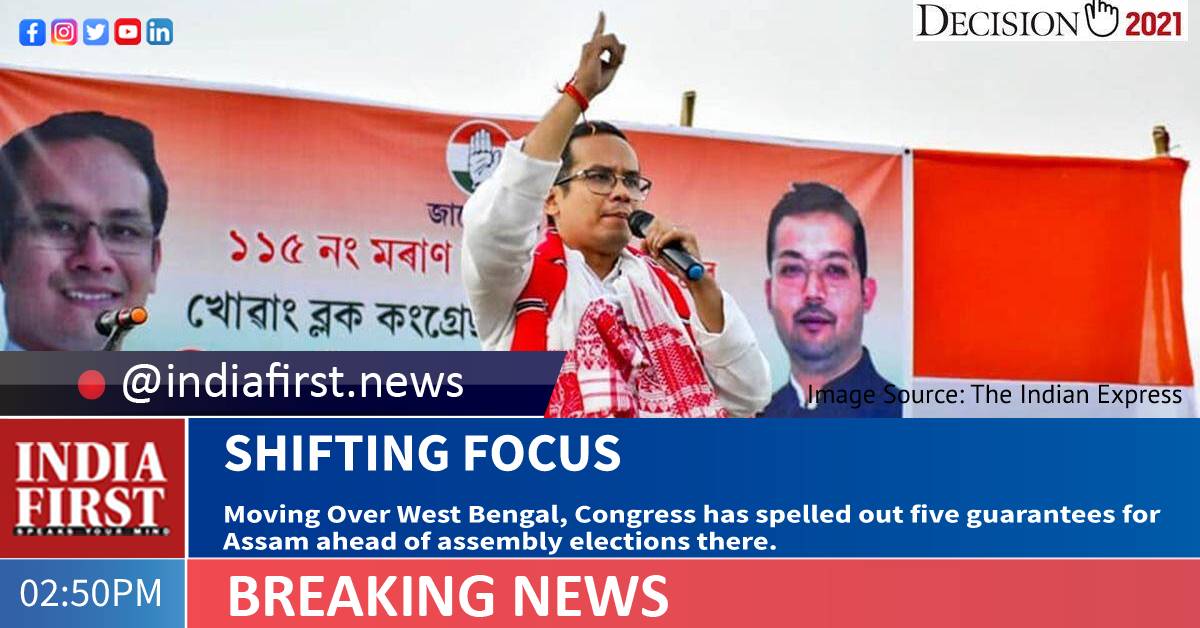 Be it Rahul Gandhi, Priyanka Gandhi Vadra or top Congress leaders, one thing is common – all of them have placed high hopes to make a comeback in Assam in the coming Assembly elections.

Assam, which will go to the polls in three phases on March 27, April 1 and April 6, is a highly sensitive state which throws up a tough contest between the two main parties in every election.

While the Congress is focusing on Assam, it is not putting in much effort in West Bengal, which will also go to the polls in eight phases from March 27 to April 29. No high-profile Congress leader has visited West Bengal so far, though Rahul Gandhi has been on a campaign trail in poll-bound Tamil Nadu, Puducherry and Kerala, apart from Assam.

While Rahul Gandhi ended the first leg of his poll campaign in Assam yesterday, Priyanka Gandhi Vadra is hitting the campaign trail in the northeastern state from today where she is expected to address six public meetings. While Priyanka Gandhi had already visited the poll-bound state once earlier this month, sources said that Rahul Gandhi may turn up for another leg of campaigning in Assam.

Meanwhile, Chhattisgarh Chief Minister Bhupesh Baghel has been camping in the state since the past two weeks, personally monitoring the Congress’ affairs in the state.

The Congress is banking on the elections on the basis of five guarantees, including non-implementation of the Citizenship (Amendment) Act (CAA) to counter the BJP.

Releasing the party’s manifesto for the poll-bound state yesterday, Rahul Gandhi said that if the Congress is voted to power at the Centre in the next general elections, its government would nullify the CAA.

“Assam was hit by violence 20 years ago, but after the Congress came to power in the state, it ensured peace, harmony and development. ‘BJP ka kaam hai todna, hamara kaam hai jodna’ (BJP’s task is to divide, but our job is to unite the people),” Rahul Gandhi said.

In Assam, the Congress has spelled out “five guarantees” which will be fulfilled if the party is voted to power. These include five lakh government jobs to the youth in five years, up to 200 units of free electricity per household, Rs 365 daily wage to tea garden workers and Rs 2,000 per month to housewives, besides the guarantee of not implementing the CAA in the state.

The Congress, which was in power in Assam for 15 years (2001-2016) until the BJP-led alliance came to power in 2016, has formed a ‘Mahagathbandhan’ or ‘Mahajot’ with three Left parties – CPI(M), CPI and CPI(ML) – along with the All India United Democratic Front (AIUDF), the Anchalik Gana Morcha, Bodoland People’s Front (BPF), Rashtriya Janata Dal (RJD) and two community-based parties – Jimochayan (Deori) People’s Party and Adivasi National Party.