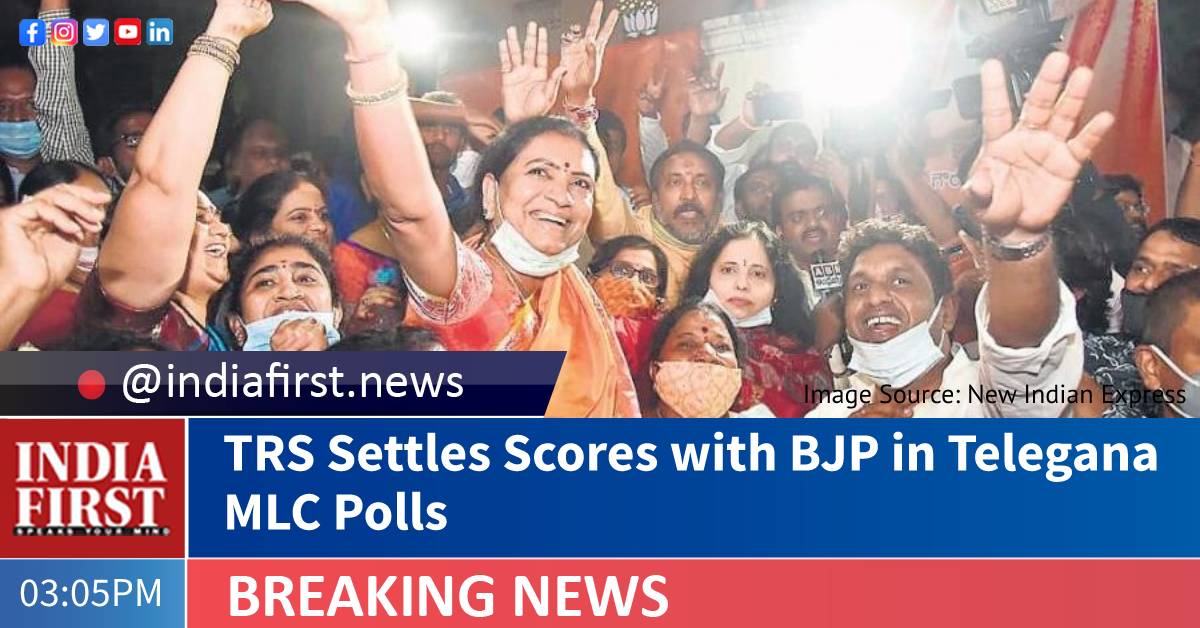 After two successive poll reverses, Telangana’s ruling party Telangana Rashtra Samithi (TRS) has bounced back in the elections to the State Legislative Council wresting a seat from the BJP and retaining the other.

The victory of the TRS in two graduates’ constituencies of the Upper House of the State Legislature has put brakes on the BJP’s success march.

Graduates were voters in both the constituencies but the fact that they were spread over more than half of total Assembly segments had made the polls significant and they were contested like the general elections.

Reeling under the shock defeat in Dubbak Assembly by-election in November at the hands of BJP and also the saffron party’s impressive performance in Greater Hyderabad Municipal Corporation (GHMC) polls, TRS was desperate for a victory.

By wresting Hyderabad-Rangareddy-Mahabubnagar seat from the BJP, TRS has settled the scores. The regional party also sent a clear message by retaining Nalgonda-Warangal-Khammam seat that nearly half way into its second term in power that it continues to enjoy the popular support in the country’s youngest state.

More than 10.36 lakh graduates were voters in the two constituencies, spread over 21 out of 33 districts.

In the elections held on March 14, 59 per cent voters had cast their votes in Hyderabad-Rangareddy-Mahabubnagar constituency while 64 per cent polling was recorded in Nalgonda-Warangal-Khammam constituency.

The counting, which was taken up on March 17, took four days.

The polls were significant as the verdict will determine which way the wind is blowing before 2023 Assembly polls. Considering this, Chief Minister and TRS president K. Chandrasekhar Rao had roped in all ministers, MPs, MLAs, MLCs and other elected representatives to ensure the victory of both the candidates.

KCR’s son and number two in the government and the party K.T. Rama Rao led the party campaign by addressing several meetings. He highlighted the achievements of TRS government during the last seven years, including 1.32 lakh jobs provided in various government departments. Though the opposition challenged Rama Rao to prove his claim, the minister launched a counter attack on opposition for what he called misleading people with false propaganda.

During the campaign, KTR launched a scathing attack on the BJP government at the Centre for showing discrimination against Telangana. He targeted the Centre for scrapping the Information Technology and Investment Region (ITIR) project sanctioned for Hyderabad and for going back on several promises including setting up a rail coach factory.

Vani Devi’s choice as TRS candidate had come under criticism from the opposition. BJP leaders had even alleged that Chandrasekhar Rao made her a scapegoat. They claimed that KCR’s only aim is to defeat the BJP candidate Ramchander Rao by dividing the votes of Brahmins.

KCR, who has been trying to claim the legacy of Narasimha Rao, justified fielding Vani Devi, who is an academician and a social activist.

The result has come as a blow to BJP’s efforts to project itself as the only viable alternative to the TRS in the run-up to the next polls. The party had gone aggressive to strengthen itself after its victory in Dubbak and after bagging 48 seats in 150-member GHMC.

The saffron party ran an intense campaign for MLC polls. Its central leader in-charge of party affairs in Telangana, Tarun Chugh and four central ministers had also campaigned for the party in the two constituencies.

The BJP can draw solace of being the runner-up in Hyderabad-Rangareddy-Mahabubnagar but its performance in the other constituency was disappointing. Its candidate Permender Reddy finished poor fourth in Nalgonda-Warangal-Khammam.

Ramchander Rao was BJP’s lone member in State Legislative Council and his defeat means the saffron party will have no representation in the Upper House. The outcome is likely to affect the party’s morale ahead of next month’s by-election to Nagarjuna Sagar Assembly seat.

BJP leaders feel that division of anti-government votes among opposition and independents led to its defeat in both the constituencies.

Another eminent academician and two-time MLC Professor Nageshwar Rao too failed to impress as he finished third in Hyderabad-Rangareddy-Mahabubnagar constituency.

In another big jolt to the Congress, it finished poor fourth in Hyderabad-Rangareddy-Mahabubnagar and fifth in Nalgonda-Warangal-hammam

Political observers say the victory will boost the morale of the TRS ahead of the next month’s by-election to the Nagarjuna Sagar Assembly seat. The constituency is likely to witness a three-cornered contest among the TRS, BJP and Congress.