Rahul Harming the Nation and ‘His Own Party Even More’: Gadkari | India First e Newspaper Skip to navigation Skip to content 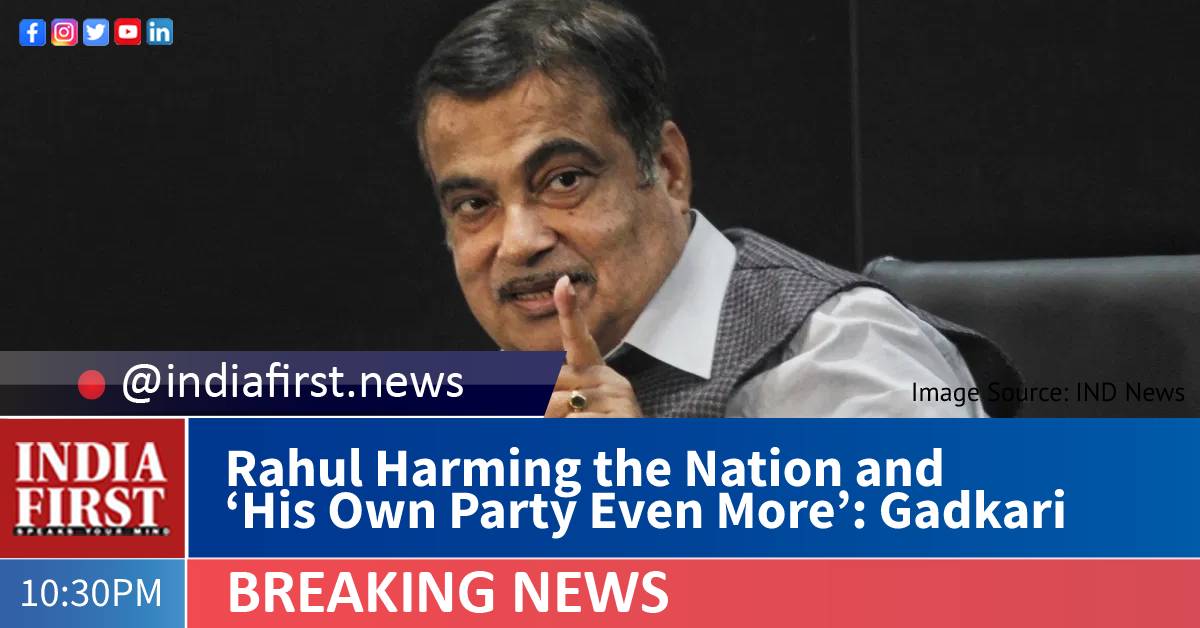 Nitin Gadkari, one of the senior-most ministers in the Central government, has attacked Congress leader Rahul Gandhi for his recent statement at an election rally in Dibrugarh, in which Gandhi alleged that the Nagpur army (a reference to Rashtriya Swyamsevak Sangh) was controlling the nation.

Describing Gandhi’s statements as amusing, Gadkari said: “By making amusing statements, not just does Rahul harm the nation, he also harms his own party even more. The prestige of both the Congress and Gandhi himself is damaged by Rahul’s statements,” Gadkari said.

Speaking on the campaign trail while travelling to Assam, Gadkari said: “Now even Congress leaders don’t take Rahul Gandhi’s statements seriously. With his amusing statements, he harms the nation and more than that, the Congress.”

According to Gadkari, infiltration by outsiders is not an election issue in Assam. “I don’t consider it as an election issue. Should we consider those who enter our country illegally as citizens? That would be really wrong. If our people enter Bangladesh through illegal means, will their government grant them citizenship? We must avoid playing vote bank politics on the issue of infiltration. The Congress plays politics even on issues of security and national interest.”

Gadkari, the Union Minister of Road Transport and Highways, is confident that the NDA, led by the BJP, will again form the government in Assam. “More work has happened in Assam in the last five years more than what happened in 50 years before that. The BJP’s governments at the Centre and the state have changed Assam beyond recognition in the last five years. Whether it is airports, waterways, railways or roads, projects worth 1.5 lakh crore have been completed by my ministry alone. Under the leadership of Chief Minister Sarbananda Sonowal, a lot of work has been accomplished. That’s why the people of Assam will vote for the BJP on the issues of welfare of villages, farmers and our anti-poverty measures.”

The first phase of polling in Assam includes those constituencies on which there were massive anti-CAA protests in 2020. Will this affect the BJP’s fortunes on these seats? Replying to this, Gadkari says: “A few individuals tried to mislead people on the issue of CAA for political gains. But the people of Assam understand what is in their interest. The anti-CAA protests have left no impact on the people.”

The mismanagement of tea gardens is a big poll issue in Assam and Bengal. About the welfare of tea workers, Gadkari says governments both at the Centre and the state have taken a number of initiatives. “Jan Dhan accounts were opened for tea garden workers. They received free medical treatment under the Ayushman Bharat scheme and accommodation under the Pradhan Mantri Awas Yojana. So, our government cared about the roti, kapada and makan (food, clothing and housing) needs of tea garden workers. Much more will be done in the future.”

Talking about Bengal, Gadkari says the state is still reeling from the impact of the rule of Left and Trinamool governments. “In such a situation, the people of Bengal are longing for change. Only the BJP can provide a strong alternative in Bengal. The forming of a BJP government in West Bengal is a 100% certainty this time.”