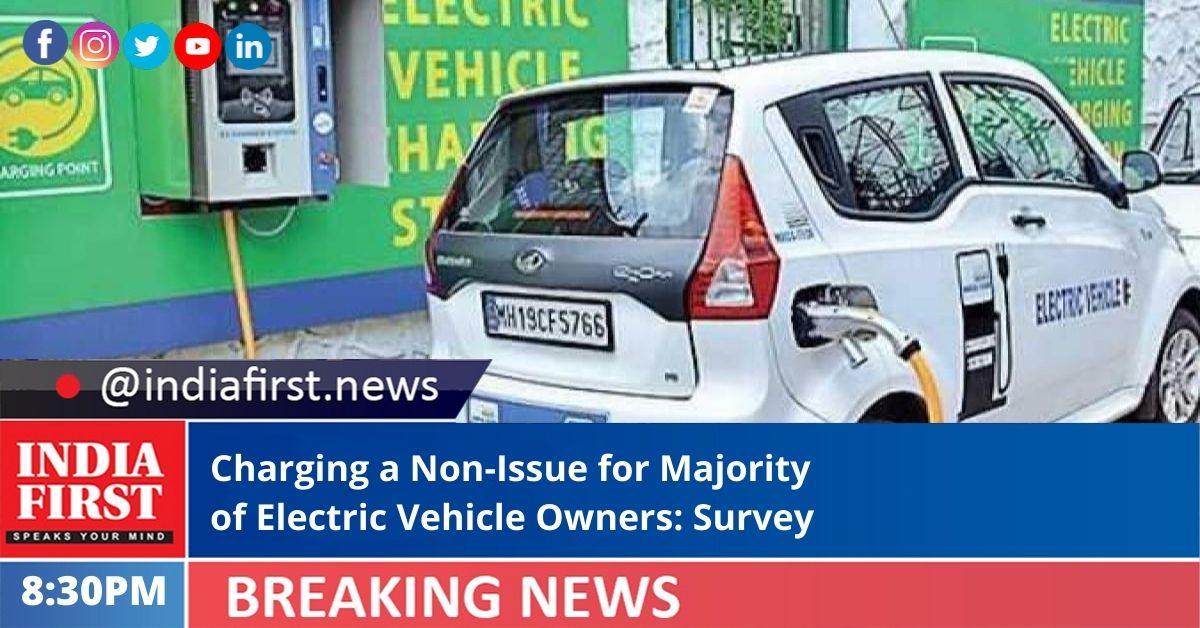 A survey found that 80 per cent of end-users of electric vehicles do not find charging a hassle and are willing to recommend it to others with high satisfaction value.

The survey, “Triggers and barriers of electric vehicle adoption”, released on today, was conducted by Climate Trends and YouGov, an international research data and analytics group.

It sought responses from 817 people across the electric four and two-wheelers segments in north, south and west zones of India.

Aarti Khosla, Director, Climate Trends, said, “The survey we did across a small segment of 800-plus buyers and users of EVs in India shows clearly that two-wheeler owners understand even today that it is better to buy an e-scooter than a conventional one.

“Users also don’t see charging infrastructure as a big issue anymore. Consumers have myths about low pickup for an EV vehicle, although as experts know EVs are inherently meant to accelerate faster.”

While consciousness for the environment is the key aspect where EV scored high, rejectors scored environmental concern for adoption as lowest.

One of the most important concerns that was called out from the perception survey was the resale value of EVs in both segments. The concern has caught the attention of policymakers as some of the EV state policies have taken this into consideration and offered buyback incentives.

Explaining this further, Abhinav Soman, Programme Associate, CEEW said, “The survey points to an important concern regarding EVs among consumers – the resale value. Recent state EV policies are already beginning to address this with incentives to OEMs (original equipment manufacturers) offering buy-back schemes and such measures will help develop a secondary market.”

On the concern of resale, Ravneek Phokela, CBO, Ather Energy, talked about the company’s position and said there is good reason to have anxiety over the resale of EVs because of the quality of products until recently. “But, it will start changing with bigger players and better products coming into the market.”

He said the company now offers a buyback on their EV models which gives the consumers the much-needed push and confidence to make the switch.

E-Cars are appreciated for their advanced technology with 83 and 79 per cent acceptors in four-wheelers and two-wheeler category, respectively, rating them better on smart, safety and advanced features compared to conventional cars.

On the contrary, range and negative perception on unreliability for long drives and need of frequent charging remained key barriers to adoption.

While 74 per cent of two-wheelers respondents rated EVs better in the overall looks and appearance than conventional bikes. E-bikes were also rated higher in value, warranty along with good running and mileage cost.

With acceptance for EVs picking up among consumers and the state policies giving manufacturers the push, the country is ready to make a transition towards electric mobility, feel experts.

Akhilesh Magal, Head, Renewable Advisory, GERMI, said, “We are at the tipping point for an accelerated mass adoption of EVs in India, especially in the two-wheeler segment. This is being aided by a strong policy push and attractive options for consumers on the supply side.

“EVs are the undisputed technology which is going to overtake the world sooner than we think. Whether it be for environmental reasons, cost competitiveness or the thrill of owning a new technology, the path for EVs seems to get clearer by the day,” added Aarti Khosla.